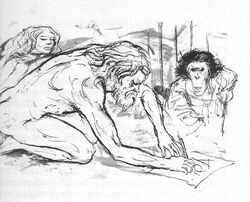 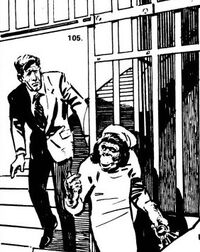 Zira was a chimpanzee psychologist and veterinarian, who specialised in the study of humans, in the novel La Planète des singes.

Zira was the fiancée of Cornélius, and both were ultimately responsible to Mi Zaïus. Her work involved both working with humans under laboratory conditions (e.g. learning and behavioural experiments), and working on them physically (lobotomy and other brain surgeries, vivisection, physical endurance and tolerance experiments, and subsequent autopsies).

Having seen him demonstrate Pythagora's Thereom, Zira discovered that her charge Ulysse Mérou, caged in the laboratory of the Institute for Advanced Biological Study where she worked, wasn't a native-born, mute human of her planet, but a space traveller capable of speech. After learning French, as it was easier to learn the language due to her species' innate mimicry abilities, she secretly taught him the language of the apes, in hopes of eventually making a public demonstration, with Mérou's consent. Cornélius also became involved, helping prepare Mérou to meet Ape society, and vice versa.

Zira's continued association with Ulysses, earned her the ire of the Earthaman's mate: Nova. Nova jealous of her interaction with Ulysses would often throw fits and tantrum, getting between them whenever possible. After Ulysses was recognized as a sentient being, Zira refrained from giving Nova another mate. When Nova displayed signs of pregnancy, the chimpanzee secretly isolated her to another section of the Institute, in fear of the revelation would damage Ulysse's social standing as having breed with an animal. Despite Nova's animosity towards her, Zira watched over her to the point where the native woman of Soror was able to relinquish her hatred of the ape allowing the one time rival to touch her son.

Zira ultimately helped Mérou and Nova to escape the world of the apes, coming to appreciate each as thinking creatures like herself, as well as having a plain fondness for them.

Zira was a scientist at heart as she actively searched for the truth rather than hide it.

Retrieved from "https://planetoftheapes.fandom.com/wiki/Zira_(La_Planète_des_singes)?oldid=57571"
Community content is available under CC-BY-SA unless otherwise noted.