Planet of the Apes Wiki
Register
Don't have an account?
Sign In
Advertisement
in: APJ Characters, Marvel Characters, Chimpanzees,
and 12 more

"All right, but you're so damned ugly."
―Zira to Taylor [src]

Doctor Zira was a chimpanzee psychologist and veterinarian, who specialized in the study of humans, in the movie series Planet of the Apes. Zira was played in the first three Apes movies by actress Kim Hunter. Unique among the Apes characters, Zira had hazel eyes.

Zira was the fiancée (later wife) of Cornelius, and both were ultimately responsible to the Minister of Science, Dr. Zaius. Her work involved both working with humans under laboratory conditions (e.g. learning and behavioural experiments), and working on them physically (lobotomy and other brain surgeries, vivisection, physical endurance and tolerance experiments, and subsequent autopsies). Zira was an outspoken liberal by nature, deploring war and militancy (and despising the gorillas, who seemed to make both a way of life), and eager to seek and develop intelligence anywhere it could be found. Zira literally stood for her principles - or refused to stand, as the case may be.

In the first movie, Zira met American astronaut George Taylor, who was shot in the throat when he was captured by gorillas, and could not speak, just as the native humans of her world could not. She tended to his throat wound, discovered Taylor had intelligence beyond any human she'd seen, and paired him with Nova, also intelligent, hoping the two will breed. When Taylor stole Zira's notepad and wrote his own name on it, Zira abruptly dropped the nickname "Bright Eyes" she'd given him, and took Taylor to meet Cornelius. Both disbelieved Taylor's story that he was from another planet, but supposed that he might be a missing link, to explain the similarities between ape and human behaviour and anatomy... and the strange artefacts Cornelius found at an archaeological dig the year before. She seemed to be fond of the humans that she worked with and gave them nicknames, such as an old one she named "Old Timer". Zira was ultimately surprised to discover that Taylor could talk and even defended him against the ape tribunal in order to discuss his origins. She later helped Taylor and Nova to escape the world of the apes, coming to appreciate each as thinking creatures like herself, as well as having a plain fondness for them. In the end, she and Taylor kissed goodbye – even though, as she told him, "You're so damned ugly". 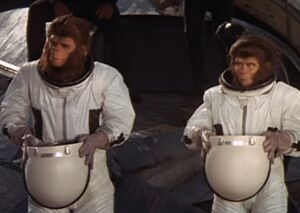 Beneath the Planet of the Apes showed Zira and Cornelius married and at home (after Zira made a political spectacle of herself at an Ape gathering), when another human entered their lives; the astronaut Brent, sent to rescue Taylor but then needing help himself. Zira was surprised to find yet another talking human but treated the bullet wound Brent had sustained, and she and Cornelius sent him and Nova (who met Brent when she had sought Zira, after Taylor had vanished) back out of the city, to spare them from the latest human round-up. When Dr. Zaius visited, he told Cornelius and Zira he planned to appoint them as his proxies, while he was away on a military campaign with General Ursus. (Zira had left her medical gear in sight; covering part of her face, she pretended to Zaius that Cornelius hit her for upsetting the Ape council.) Zaius admonished them both to maintain the status quo, and keep their more liberal values in check. Zira and Cornelius promised to do so, and Zaius departed. In the novelization of the movie, they subsequently began a chimpanzee revolt, with Zaius and the gorilla army gone. 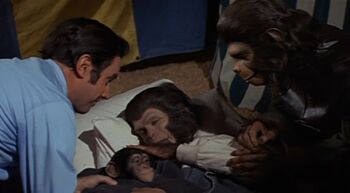 Escape from the Planet of the Apes had the pregnant Zira (with Cornelius and their friend Dr. Milo) making a different kind of experiment – this time space flight, in Taylor's restored craft the Icarus, when they realised their world was doomed. In a reverse of Taylor's experience, the spaceship traveled back in time to a few years after his mission began, splashing down off the California coast. The movie followed Zira and Cornelius (after the accidental death of Dr. Milo) through their discovery of, and eventual rejection by, human society. A large portion of the rejection came from Zira's drugged confessions of the details of her human experiments, to the shock of the reactionary Presidential Commission, who declared them atrocities, since they were done to humans. Zira's and Cornelius' accounts of their origins, and of humanity's coming downfall, further stigmatised the couple. Zira seemed to better understand this turn of events, as everything she admitted was indeed true about Dr. Zaius and the Ape society. When Cornelius denounced the humans for "jabbing needles into my pregnant wife", Zira remarked she was in no position to judge as back home she performed similar experiments on human women and the Apes were guilty of worse barbarisms.

Their baby was born (named Milo after their friend, but later called Caesar), but Zira and Cornelius were murdered a few days afterwards. Circus owner Armando took them in when the baby came; Zira switched her newborn baby with a circus chimp when she and Cornelius had to go into hiding, leaving Armando a clue in case they didn't return.

Zira made no further appearances in the Apes movies, although she was mentioned by name in the remaining sequels, and appeared in video stills (while her recorded voice told the story of their space flight, and of the Earth's destruction) the adult Caesar plays back, to learn more about his parents, in Battle for the Planet of the Apes.

In BOOM! Studios' Planet of the Apes: Cataclysm, Zira's past is explored more fully. Her sister Cassia was killed when the destruction of the Moon caused a huge wave to hit Ape City, eight years before Taylor's arrival. Zira dutifully looked after Cassia's son Lucius, with the help of Prisca, who was a major influence in Zira's life. Zira briefly became involved in a chimpanzee plot to murder Zaius and expel all orangutans and gorillas, but backed out at the last moment and instead helped to bring calm between the ape factions.

The 2018 novel Death of the Planet of the Apes seeks to explain the change in Zira's fortunes between each of the three movies. After Taylor's final departure for the Forbidden Zone, there is a rapprochement with Zaius, prompted by his need for allies against Ursus and Sabian. Thus, Zira and Cornelius receive promotions, are appointed to the Citizen's Council, and are married by Zaius. In their new positions they discover yet more secrets of ape history, such as the Lawgiver's true identity and the story of Aldo, and are forced to flee Ape City to Milo's spaceship repair site.