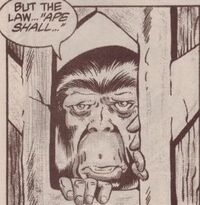 Zenir was an ape living in Ape City in the mid 21st century. Ape leader Alexander placed Zenir in charge of the city's armory. One day, while Alexander was on an expedition to the Forbidden City, an ambitious gorilla commander named General Ollo staged a coup against the city elders. Invoking the name of the gorilla revolutionary Aldo, Ollo raided the armory and shot Zenir to death with a machine gun.

Retrieved from "https://planetoftheapes.fandom.com/wiki/Zenir?oldid=37111"
Community content is available under CC-BY-SA unless otherwise noted.