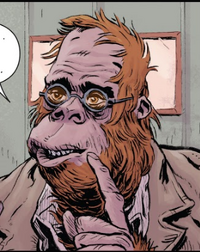 Zaius was an orangutan scientist and the primary antagonist of Planet of the Apes: Visionaries.

Upon hearing about the unusual behavior of a man at the institute, and rumors of that he was possibly intelligent Zaius visited the human, Thomas. Despite Zira's insistence that he showed intelligence, the orangutan dismissed her notions, having seen a similar case where a woman learned about eleven words but never really understanding. Seeing Thomas's attitude to be disliking, he decides to plan to perform a brain operation on him.

After Zira manages to communicate with Thomas, she tries to convince her peers that he is an intelligent man from another world. Her colleagues believe that she is joking and dismiss her notions. When the chimpanzee pleas to the orangutan, he tells her he already had him sent to the brain operating ward.

Thomas is saved from a grisly fate after he manages to speak and later Cornelius arranges for the human to be before the Ape Congress. There upon seeing Thomas at the stage and delivers a speech explaining his origins Zaius is stunned into silence is the last person alongside the President. Despite the President stating that Thomas is a rational being like an ape, Zaius expresses his concerns of while he hopes he is there equal and not there superior.

Later while waiting for tea at Thomas's apartment, Zaius having learned that the man had taken a wild woman, Nova, as his mate, is dismissive of their relationship making derogatory comments of her animal behavior. The couple then arrive from their walk, Nova now clean and in a dress, pours tea for the ape, offering him sugar. The act disgusts Zaius, who knocks the teacup out of her hand.

He joined the human and Cornelius to investigate a dig site where the archaeologists uncovered a number of human The orangutans maintains that the graves were of human pets despite all evidence to the contrary. Thomas mocked his obstinate beliefs that man could never achieve rational thought. He himself is living proof that it is as well as the site. Zaius eventually returns to the city having stated he already has learned enough about man, a belligerent animals that is prone to self-destruction.

Zaius then leads a conspiracy to destroy all the evidence of a human civilization. He later orders the death of Lavende who was beginning to relearn speech and later Thomas. Just as Thomas makes his escape to the jungles to reunite with Nova, Zaius tracks him down in a heliocopter and has his minions shoot the human just at the foot of the ruins of the Statue of Liberty.

Retrieved from "https://planetoftheapes.fandom.com/wiki/Zaius_(Visionaries)?oldid=58771"
Community content is available under CC-BY-SA unless otherwise noted.