Battle of the Titans
Doctor Zaius reappeared yet again in the animated series, with no obvious connection to any other version of Zaius.

He served as a government official who held influence within the Ape Senate, and had authority over both Cornelius and Zira, and their scientific enterprises, as well as General Urko and his military. He wanted Bill Hudson captured but also distrusted Urko's ambitions. 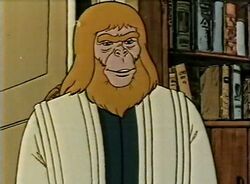 Retrieved from "https://planetoftheapes.fandom.com/wiki/Zaius_(Animated)?oldid=59836"
Community content is available under CC-BY-SA unless otherwise noted.