Mi Zaïus was a leading orangutan scientist on the ape-dominated planet of Soror, the title "Mi" denoting a rank of honour.

The head of the Research Institute, he was informed by Zira that she had discovered a human who was capable of thought, and even of speech. Zaïus, who did not believe the fact that man could have a soul or a spirit, dismissed her claims as nonsense.

To prove his point, Zaius subjected Ulysse Mérou to various tests and exercises and, to much of his embarrassment, failed to disprove the man's intelligence. It was he who assigned Ulysse to be paired with Nova to become mates. When Ulysse refused to mate with Nova, Zaius provoked an animal reaction from the human after he gave Nova to his neighbor.

On familiar ground, he decreed that Ulysse's talents were due to highly developed animal instinct and asserted that he was a tame man, probably due to a former period of captivity.

At a biological conference, he intended to present his thesis on the remarkable trained man, but was discredited when Ulysse made a convincing address to the ape masses.

Zaïus was later dismissed from his post as head of the Institute and replaced by Cornelius.

After shocking revelations from an ancient city and a chimpanzee's experiments concerning man, Zaïus had been scheming with the orangutans against Cornelius and the Earth man.

When Sirius was born, the Grand Council planned to place the boy under Zaïus' charge to ensure that a new race of intelligent men did not become a reality. After Ulysse's family positions at the Institute were replaced by Sororian humans, presumably Zaïus proved that 'Sirius' was just a ordinary unintelligent human. 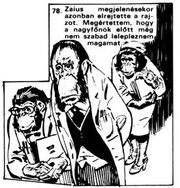 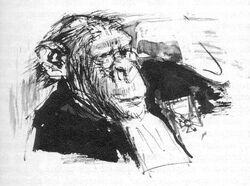 Retrieved from "https://planetoftheapes.fandom.com/wiki/Za%C3%AFus?oldid=59662"
Community content is available under CC-BY-SA unless otherwise noted.