Planet of the Apes Wiki
Register
Don't have an account?
Sign In
Advertisement
in: Marvel Characters, Orangutans, Male Characters,
and 6 more

Brother Xavier was an evolved ape that lived in the mid-21st century. When the Lawgiver mounted an expedition into the Forbidden Zone, he left Xavier to take charge of Ape City legislation in his absence. A weak and indecisive ape, Xavier was easily bullied by those willing to manipulate him. Gorilla peace officer Brutus knew of this, and petitioned the ineffectual Xavier to authorize military force to arrest the refugees, Alexander and Jason. He was brutally murdered on Brutus' orders, for political reasons. 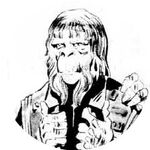