Planet of the Apes Wiki
Register
Don't have an account?
Sign In
Advertisement
in: Marvel Characters, Hybrids, Characters,
and 2 more 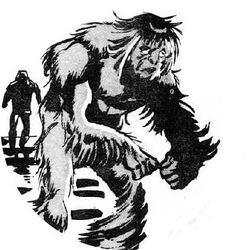 The White Ones were a race of largely mute ape/human hybrids who lived in the Forbidden Zone. They were enslaved by the Inheritors and their Mutant Drones.

One of the tribe - nicknamed 'Shaggy' - travelled with Jason, Alex and the Lawgiver but was killed by Brutus when a shot meant for Jason went awry.

When Mungwortt encountered the tribe, they were brutal carnivores to whom Ape City's political outcasts were fed. They were lumbering creatures with the bodies of apes but the facial features of humans, with little hair other than a white mane around their faces, and each had a metallic tag in one ear through which they were controlled. Mungwortt, however, befriended their leader - nicknamed 'Dinge' - and led a revolt against the Inheritors.