Planet of the Apes Wiki
Register
Don't have an account?
Sign In
Advertisement
in: Locations (CE), CE, Locations

Dawn of the Planet of the Apes: Firestorm
The West African Jungle is the native home to the chimpanzees, located across Côte d'Ivoire, Liberia, Sierra Leone, Guinea and Guinea-Bissau. The jungle housed other animals such as birds, leopards, crocodiles, snakes and others, but was primarily dominated by chimps.

The jungle was home to chimpanzees Alpha and Bright Eyes, along with the other members of their troop. This was where Caesar was conceived. One day, while the chimps were foraging for food, Alpha noticed that the birds were flying away and to their surprise, poachers were near the troop and planned to capture them to sell them on the black market or as bushmeat. The poachers were led by "the Dutchman", along with Karega, Nderu and others.

The poachers attacked the troop and using snare nets and cages. Bright Eyes and many other chimpanzees were captured by the poachers. Alpha was shot by Karega while trying to rescue his mate. The fate of the rest of the chimpanzees is unknown, although some avoided capture. Bright Eyes' fate was being shipped off to Gen-Sys Laboratories in San Francisco where she became a test subject for a gene therapy called ALZ-112. She died shortly after the ALZ-112 testing and giving birth to Caesar, who inherited the ALZ-112 from her and Alpha's white skin birthmark over his chest. The design of the walls of the infirmary and exercise enclosure at the San Bruno Primate Shelter was quite similar to the jungle, so the apes might feel free and in their natural habitat. 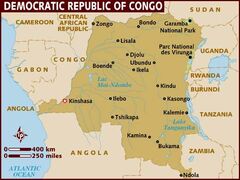 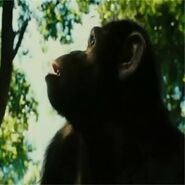