Planet of the Apes Wiki
Register
Don't have an account?
Sign In
Advertisement
in: APJ Characters, Marvel Characters, Gorillas,
and 11 more

"The only good human... is a dead human!"
―General Ursus

General Ursus was a gorilla and a leading official of Ape City. He instigated the invasion of the Forbidden Zone, which led to the destruction of Earth. As such, he serves as the primary antagonist of Beneath the Planet of the Apes.

Ursus was an ape military commander who lived in the East Coast Ape City during the latter half of the 40th century. Eventually rising to the rank of General, Ursus became the highest ranking military official answering only to the Minister of Science, Dr. Zaius, and was possessed of an insane vision of conquest. Ursus sent a scouting expedition into the Forbidden Zone. A number of his scouts disappeared, and one returned telling harrowing stories of ape crucifixions and great walls of fire. Consulting with Zaius and other elder ape statesmen, Ursus concluded that whatever lived in the Forbidden Zone was a threat to simian survival.

Ursus had an intense rivalry with Marcus, head of the Simian Secret Security Police Force, and shortly after the arrival of astronaut George Taylor, Ursus and Dr. Maximus tried to have the police force absorbed into the army to launch an exploration of the Forbidden Zone in search of heretical apes or some other sentient (non-human) creatures, through an 'Ape City Security and Defence Declaration'. When his plan was rejected, he angrily left with his army for manoeuvres, just before news broke about Taylor speaking.

In a rousing speech delivered before a large congregation of apes, Ursus rallied the cause of war, and proposed a mounted invasion into the Forbidden Zone. The Ursus speech gained momentum primarily through a doctrine of fear. He emphasized the fact that the aggressors from the Forbidden Zone threatened the community's food supply, in tandem with the recent crop failures had caused a downturn in the economy of Ape City. Ursus concluded his speech with the remarks that "if they live, and live they do, then they must eat!" Dr. Zaius was at first reluctant to allow Ursus so much influence over his contemporaries, but soon came to realize the importance of the General's march to war and goes along with his agitation for different motives, while the chimpanzees were much more reluctant.

Journey to the Forbidden Zone 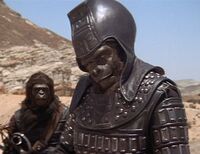 Ursus personally led the march into the Forbidden Zone, despite the protests of several pacifist chimpanzees. They arrived at the devastated ruins of what was once New York City. Other than Dr. Zaius, few apes (including Ursus) were aware that the Forbidden Zone was "once a paradise" destroyed ages ago by mankind's warlike nature.

The human settlement in the Forbidden Zone was actually a cult of subspecies mutants. Though their bodies had been ravaged by the effects of atomic radiation, their minds were highly developed and they possessed the ability to project their thoughts into the minds of others, as well create fantastic illusions.

The mutants attempted to stave off the invasion by projecting various images of apes nailed upside down to crosses on fire. Ursus himself even reeled when the visage of a venerable ape spiritual leader, the Lawgiver, appeared before them with blood pouring out of cracks in his face. While the gorilla soldiers panicked, it was Dr. Zaius who saw through the fallacy and boldly rode into the flames.

Once bypassing the sordid hallucinations, Ursus and his army marched into the ruins of the Forbidden Zone. They found the mutants at the altar of a cathedral. The movement's leader, Mendez XXVI, prostrated himself before a preserved relic of the 20th century – the Alpha-Omega Bomb, who announces it as an instrument of his god. The ape soldiers are monentarily taken aback to hear a talking human. Ursus ordered a sergeant to open fire on Mendez, then arrogantly remarking to the dying man, "your god didn't save you, did he?". Ursus then orders his lieutenants to explore all sections of Forbidden City to root out any loose ends.

The General, unaware of the bomb's true potential, ordered his men to pull it down from the altar with ropes and a pulley, in spite of Zaius' protests ("Ursus, no! That weapon was built by man!") Slamming upon the stone floor, the shell casing of the missile cracked open, releasing a deadly gas which killed the ape soldiers who were extracting the missile. Still overconfident, Ursus remarked that he would find a way to stop the gas.

Unbeknownst to Ursus at the time, the mutants had two human astronauts imprisoned within their citadel, Colonel George Taylor and astronaut John Brent. Taylor and Brent had escaped confinement and raced to the altar room in a desperate effort to disable the Doomsday bomb. Zaius spots Taylor and Ursus shoots at Taylor wounding him, in return Brent who had acquired a rifle perched himself on a riser above the altar and took aim at Ursus, Brent opens fire and shoots a bullet into Ursus causing him to topple over and fall down a few steps on the ground where the ape General lay motionless and dead.

Even if Brent's shot didn't fell the surly gorilla, he would have been killed regardless. Moments after Ursus' death, astronaut Taylor, dying from his own wound, fell upon the Alpha-Omega launch controls, detonating the bomb, thereby destroying the entire world.

In BOOM! Studios' comics series Betrayal of the Planet of the Apes, Exile on the Planet of the Apes and Planet of the Apes: Cataclysm, Ursus time before Taylor's arrival is explored. He was a henchman for the anti-human orangutan Councilor Tenebris, and on his orders organised the murders of Doctor Cato and Councilor Quintessa, and tried to murder General Aleron during his incarceration at The Reef. Although Doctor Zaius had not agreed with Tenebris' actions, he came to depend on Ursus during the unrest that followed the destruction of the Moon. Ursus' heavy-handed response to chimp protests almost caused an ape civil war but this was narrowly avoided. Doctor Milo came to believe that Ursus was actually a human mutant from the Forbidden Zone using illusion to disguise himself and fomenting trouble in Ape City, and his reporting back to two mutants after order had been restored to the city would seem to confirm this, or at least that Ursus was an agent of the mutants.

In the intercompany crossover Star Trek/Planet of the Apes: The Primate Directive, Ursus was part of a small faction of gorillas who was sent to repel rogue gorilla general Marius. Ursus was disgusted that Marius had betrayed the ape society in his mad attempt to conquer Ape City. There was a slight skirmish between the two generals yet Ursus prevailed against Marius. He was in fact going to kill Ursus with his Klingon disruptor weapon, but one of Marius' own men betrayed him and saved Ursus.

The 2018 novel Death of the Planet of the Apes details Ursus early life. He had been an orphan and a rebellious youth, but was raised by Kananaios, a preacher and friend of Sabian. His religious zeal fuelled his belief in his destiny as conqueror of the Forbidden Zone.