Planet of the Apes Wiki
Register
Don't have an account?
Sign In
Advertisement
in: Comic Books, Adventure Comics, Malibu Graphics

Urchak's Folly was a 4-part comic mini-series launched in January 1991 by Malibu Graphics. The series was written by Gary Chaloner, with art by Gary Chaloner, Greg Gates, Dillon Naylor and Tom Smith. It was one of the best-regarded of the Apes series' from Malibu, with a good story and some excellent artwork. Chaloner acknowledged the influence of not only Planet of the Apes, but also Bridge on the River Kwai and The Time Machine on this mini-series.[1] 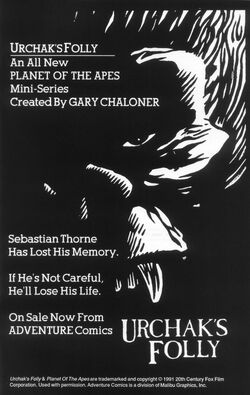 Colonel Urchak - a follower of disgraced General Ollo who even scarred his face to resemble that of his hero - was punished for his disloyalty to Ape City by being sent on a mission to build a road and bridge through an uncharted valley somewhere to the north of Memphis. Unhinged by the gruelling work and the constant attacks by the Taylorite-led primitive hybrid 'Mud People', Urchak has decided that once he crosses the great valley he will set up his own empire. He briefly captures and imprisons the Taylorite priestess Miranda and holds her as his sexual slave. She escapes into the valley, where she encounters a mute but intelligent man named Thorne, who has no memory of how he came to be there. They are both captured and taken to Urchak's camp. Thorne later recalls that he was an inmate at a 'Home for Mental Incurables', and that he was the test subject for a nineteenth-century time machine which sent him to this era.

Some among Urchak's entourage are unsure about his plans, and Sergeant-Major Caspian, bridge architect Claudius, Dr. Titus and his assistant Morris, with their telepathic mutant human slave William, secretly plot to destroy the bridge before it can be used, but Caspian is killed by the increasingly-insane Urchak. The Mud People and the Taylorite mandrill Argo DiVincenzo launch an attack on Urchak's camp to free their priestess, while Claudius takes on the responsibility of sacrificing himself to destroy his bridge. Titus is also killed. Urchak, chasing Thorne and Miranda through the ancient ruins of the city Thorne once called home, is tricked into entering the time machine and is sent back to the nineteenth century. Thorne then notices Urchak's centuries-old stuffed corpse among the debris of the laboratory. As Argo travels south towards Phis, Thorne, Miranda, Morris and William set off east towards Ape City.