Tom Burman credits John Chambers with helping him attain an apprenticeship at 20th Century Fox Studios. His father, Ellis Burman Sr., was a noted mask & prop maker who was head of the lab at 'Don Post Studios' - at that time co-owned by Don Post and Verne Langdon - and Ellis' sons Tom and Ellis Jr. also went to work at the studio, famous for it's commercial 'over-the-head' masks. John Chambers was also working on projects in partnership with Don Post Studios, notably the 'Burbank Bigfoot' model created for showman Jerry Malone from a body-cast of actor Richard Kiel (and passing showman Frank Hansen's 'Ice Man' project on to Howard Ball and Werner Keppler) and co-creating a wax museum in Canada, for which Chambers had engineered and designed a gorilla. As a result of this contact, Chambers recommended Tom Burman to Ben Nye, the head of Fox's makeup department, who gave him a job in July 1966.[1][2][3]

Burman remembers, towards the end of that year: "One day I was cleaning up after Mr. Nye following a makeup test. I overheard him complaining about a film Fox would be doing that he and Dick Smith were not prepared to take on. Fox wanted Bud Westmore because he had more appliance experience, having done 'The List of Adrian Messenger'. I was new and reluctant to enter a conversation between two journeymen, much less my boss. But I interrupted anyway: 'Excuse me, but John Chambers did most of that work'. Ben looked at me for a beat, then said, 'So call him!' I did, and he came in and got a script on Friday. Monday morning John pulled in and parked in front of the department. He climbed out of the car with the script under his arm. He saw me and waved for me to hurry and join him at his car. Curiously I stood before him, noticing his anxiety. He stuttered a bit as he said, 'Tommy, I'm going to win an Academy Award.' I looked into his watering eyes as he continued, 'and you're gonna be with me boy.' He pulled the screenplay out from under his arm and handed it to me. It read 'Planet of the Apes'. I had a sense we were about to make history." And he proved to be correct as Planet of the Apes was ground-breaking in terms of creative makeup. When Chambers signed on to oversee Planet of the Apes, he took Verne Langdon and Pat Newman, both from Don Post Studios, along with him, joining Tom Burman and many, many other talented makeup artists. Chambers was also right about the awards the project brought, as Burman recalls: "Although I was behind the curtain when John won the Academy Award, it was one of the highlights of my life and the beginnings of a thankful and successful career."[4] 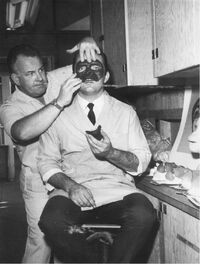 Tom Burman and John Chambers designed the makeup for the David Wolper Productions/ABC-TV four-part documentary series 'Primal Man', about prehistoric man's struggle for survival. Fellow-Apes makeup artists Ellis Burman Jr., Werner Kepler, Ken Chase, Ed Butterworth and Fred Blau all worked on the series, while Janos Prohaska and his son Robert designed the costumes. During filming of the final episode, on March 13 1974, some of the cast and crew boarded a chartered plane to return to Los Angeles, but it crashed into a mountain, killing all 36 people on board, including Janos and Robert Prohaska. The 'Primal Man' project was re-named and aired in 1974 as the acclaimed series 'Up from the Ape', including the footage already shot and recovered from the plane wreckage.[5] Only the merest quirk of fate caused the Burman brothers to miss flying back to LA with the rest of the crew on the doomed airliner from location shooting.[6]