"Could Man ever have known so much, and done so little with it?"
―Galen

"The Legacy" is the fifth episode of Planet of the Apes. 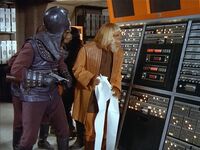 The astronauts make their way to a ruined city, Oakland, where they find a holographic projector that tells of a buried site containing a chunk of the world's knowledge, buried in anticipation of the apocalypse that ended human rule. If they can elude gorilla pursuers long enough to repair the ancient projector, the film will tell them why their world was destroyed. They are aided in part by a young woman, Arn, and a street urchin, Kraik. Alas, Urko is hot on the fugitives' trail. Alan is captured and put in a cell with a young stool pigeon.

Ron Harper remembered: "There’s one that took place in a castle. A castle right in the middle of what was supposed to be Oakland, California - that was very strange! Again, I enjoyed that episode, because it was a kind of an acting thing with Zina Bethune and the little boy (Jackie Earle Haley) playing her son. They were supposed to be symbolic of my character's wife and son on Earth, back in 1980. Anyway, that castle set was left over from a Mel Brooks movie, 'Young Frankenstein' [1974]. It was going to be torn down, so Stan Hough, who was a hands-on producer, asked, "When do you have to tear it down?" They said, "Next week." He said, "All right, we're gonna shoot it." So we shot it that week! To save money, they tried everything they could do!"[2]

Zina Bethune believes the set of "The Legacy" (which she remembers as MGM Lot #11) was also used for Earthquake, the 1974 disaster movie starring Charlton Heston, John Randolph and a vast number of POTA stunt performers. Bethune was able to explain the appearance of a dog in the opening scenes, a species whose extinction was central to the plot of the original movies: "There was a stray puppy running in and out of the shots. James [Naughton] fell in love with him and took him home. I am a big animal activist, so that meant a lot to me."[3]

Harper also recalled, "There was a photograph Virdon carried around of his wife and son. The photo was actually of my wife, Sally Stark and the producer's son. But when we filmed "The Legacy", they had cast a blonde actress, Zina Bethune, as the mother. Sally had dark hair, and to reinforce the story's point, they had to reshoot the photograph with a blonde actress."[4] This might also suggest that the character - Sally Virdon - was named after Sally Stark.