Planet of the Apes Wiki
Register
Don't have an account?
Sign In
Advertisement
in: Comic Books, Dark Horse Comics

In 2001, acclaimed director Tim Burton released a new version of Planet of the Apes. This version was an entirely new movie rather than a remake. It failed to find its audience, but the comics were a different matter. Merchandising king, Dark Horse Comics, quickly produced their own comic adaptation of the movie and started pumping the market with new series and titles spun-off from that fictional universe. The comic books proved to be fairly successful and published nine original comic adventures (also collected into three original graphic novels) before passing into cancellation as a result of the poor response to the movie which spawned them, and the abandonment of plans for a movie sequel.

Planet of the Apes: The Human War 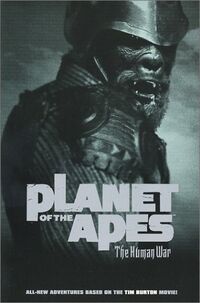 Several decades after human astronaut Leo Davidson's adventure on the ape world, ape society had been torn apart from within by a horrible civil war that had erupted between ape rebels advocating human integration and the fearful but powerful ape regime. The human Esau and the ape Seneca led a group of human/simian insurrectionists at the brink of toppling the Council's rule. Hard-liners like Minister Shiva and Minister Rodi demanded a devastating response while others, like the Senate Chairman, considered negotiation. The conflict had reached a bloody stalemate but Shiva wouldn't wait for a vote. She intended to enter the Forbidden Zone to reveal a secret history of her society and turn everything upside down. Meanwhile, a double-agent walked a dangerous line, working for the ape army while smuggling arms and provisions to the rebels. When this agent was exposed, secrets were revealed that forced both sides into a race against time for the ultimate weapon in the war - nuclear power! As both sides raced to find the wreckage of the spaceship Oberon, Attar, the wise but exiled gorilla general, wondered if Shiva's fanaticism and hatred for humans would spill over to all ape kind. Wiping out most of the rebel forces, she continued to follow her grandfather, Thade's clues to the ultimate weapon - and to her downfall.