"This is the ape I told you about!
Thank you.
"
―Stone showing gratitude to Bad Ape.

Stone is an evolved chimpanzee and a follower of Koba who assisted in the bonobo's plans to annihilate the humans and to bring about a war. Stone is also a member of the Ape Council as well as a soldier of the Ape Army. He becomes a follower of Caesar again after Koba's death between Dawn of the Planet of the Apes and in War for the Planet of Apes but lost his position on the council for collaborating with Koba.

Ten years ago, Stone was liberated from captivity during the infamous Ape Rebellion where he would join his fellow apes in escaping from the city to embrace true freedom within the Muir Wood Park. At an unknown point, he met and befriended another chimpanzee named Grey and the two would go on to meet the bonobo Koba becoming his faithful followers accompanying him everywhere he went and doing as he commanded.

When Caesar ordered Koba to follow Malcolm and his group as they drove back to the colony of human survivors, Stone, Koba and Grey climbed over the desolate Golden Gate Bridge and crept over towards the city, where they discovered that there were indeed other survivors of the Simian Flu epidemic. That night, the ape council have an argument about what is to be done about the humans until Caesar orders for them to stop stating the apes have created a new age for themselves and could lose everything if they went to war. He ends the meeting by stating he would make a decision by morning.

Marching into the city

The next morning, Stone along with the rest of the Ape Army march into the ruins of San Francisco where they confront the human survivors at their shelter. Stone stays quiet as Caesar surprises the humans by speaking to them and warning them to never enter the Muir Woods Park or else there will be war. He then watches as Caesar personally warns the human Malcolm to never come back to the woods.

Later, the human Malcolm enters the Ape Village where he is captured and brought for Caesar to pass his judgment. Stone watches as Caesar spares the human and gives him permission to work on the city dam. Stone would then watch as Koba confronts Caesar over his decision to spare the humans and allow them to work on the dam only to back down after Caesar intimidates him. With Koba starting to lose his good relationship with Caesar, the ape trio returned in secret to the city where Koba reveals he wants evidence that the humans can't be trusted. They then witnessed humans had a prepared and are practicing in a large armory with enough weapons, if intended, to kill every ape with this known they flee the area and head home. After returning to the Village to warn Caesar about the humans being dangerous, they are told by Blue Eyes that Caesar is helping the humans at the dam. Stone alongside Grey, would watch an angry confrontation Caesar and Koba which would escalate to Caesar violently beating Koba to bloody pulp only to stop himself after remembering the "Ape Not Kill Ape" law. At night, Grey asked sulking Koba if they should tell Caesar about the human's armory, but Koba tells Stone and Grey to stay quiet about it.

After Koba stole a gun from the armory and Carver's lighter, Stone set a part of the ape village on fire and came forth as Koba blamed the humans for shooting Caesar and the burning of the ape village. The bonobo, taking up the mantle of king for himself, then ordered the apes to attack the humans while they still have the chance in order to avenge the "death" of Caesar.

Following his people into Battle

Stone assisted the army in stealing weapons from the human armory and charged into battle with the apes. Stone took down many humans in the attack and would relish in joy at his vile actions. As he showed his excitement to Koba while standing on top of a broken down trolley in the battle, he was blown up when a human tank suddenly appeared and fired a rocket at the bus causing it to explode, injuring Stone in the process. Thinking that Stone was killed in the trolley's explosion, Koba was deeply affected by it. Going out of his way, Koba climbed onto the tank that fired the rocket, and killed the driver, taking control of the vehicle in the process. The bonobo then used his new weapon to destroy the Human Colony Gate allowing the apes a safe entry while avenging his fallen comrades.

After Koba's death and on the contrary of Grey and Red, Stone becomes a loyal follower of Caesar. Later he is captured with the rest of the Ape Colony. Stone was the first ape prisoner to notice Bad Ape when he first dug through the ground and into the cage where the adult apes were held. He quickly looked away from Bad Ape for fear of raising suspicion from the human guard right next to him. Other apes started noticing Bad Ape but similarly, pretended they didn't see him. After the guard left the cage, Rocket went to check out what all the apes were gaping at, and was relieved to find Bad Ape sticking his head out of a hole, who he then introduced to everyone. Stone thanked Bad Ape personally and moved closer to hold out his hand. In return, Bad Ape made room for himself and held out his own hand to greet him. Later, when the apes were escaping, Stone wasn't seen among the apes who were shot down by soldiers on the wall so its safe to assume that he made it to the paradise alive in the end.

From what had been seen from his actions, it was shown that Stone was a firm follower in Koba and it had been seen that both possessed a penchant love for violence and live only for the amount of destruction. Moreover, he was seen by Koba's side supporting his actions throughout most of the movie before his assumed death, he also had a dislike for humans, and dislike Caesar's reign, as the Ape King for unknown reasons.

That being said he returns to Caesar's command after Koba's death and doesn't join Koba's other followers as donkeys in Colonel McCullough's army, showing while he disliked Caesar's rule he will stay with his fellow apes, indicating his loyalty to his fellow apes is greater than his former distain for Caesar.

Stone with Grey and Maurice during the first sighting of humans in a decade.

Stone with Koba and Grey.

Stone with Koba and Grey in the ruins of San Francisco.

Stone with the ape council. 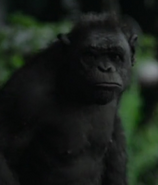 Stone in War for the Planet of the Apes. 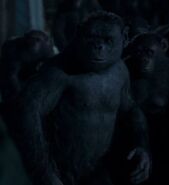 Add a photo to this gallery
Retrieved from "https://planetoftheapes.fandom.com/wiki/Stone?oldid=60656"
Community content is available under CC-BY-SA unless otherwise noted.