Planet of the Apes Wiki
Register
Don't have an account?
Sign In
Advertisement
in: APJ Characters, Marvel Characters, Humans,
and 6 more

"Did I tell you about Stewart? Now there was a lovely girl. The most precious cargo we brought along. She was... to be the new "Eve"."
―George Taylor

Lieutenant Maryann Stewart was a female astronaut who accompanied George Taylor, John Landon and Dodge on their fate-filled expedition through space. Six months into their mission, the crew placed themselves into a state of suspended animation, in preparation for their long voyage. While they slept, their space vessel, the Liberty 1 (nicknamed "Icarus"), passed through a Hasslein Curve in space, and was propelled forward through time several thousands of years. During their journey, Stewart's stasis pod malfunctioned and an air leak caused her to die in her sleep. When Taylor and the others finally awakened in the 40th century, they found the remains of Stewart's dessicated body in the pod. The ship crashed down onto Earth in the middle of a salt lake. Taylor, Dodge and Landon were forced to evacuate the ship, and Stewart's body sank to the bottom of the lake along with the rest of the ship.

An 'ANSA Public Service Announcement' (a bonus feature from the Blu-Ray Planet of the Apes Box-Set released in November 2008) gave her the first name Maryann and included this biography: "Lieutenant Maryann Stewart, 33, is both a career astronaut and a respected biological researcher. A veteran of ANSA's Apollo and Juno space programs, she brings experience, curiosity, and old-fashioned guts to the team."

The 2011 novel Conspiracy of the Planet of the Apes and its 2018 sequel Death of the Planet of the Apes revealed more details of her life, inspired in part by the 'ANSA Public Service Announcement'.[1] Maryann Stewart was initially a NASA astronaut but transferred to ANSA and covertly become the joint-first American woman in space aboard the Probe Six. She had an affair with Taylor and the two plotted to find out more about the classified ‘Churchdoor’ project. Stewart was biologist with the Juno mission between Mars and Jupiter, where she briefly took control after the death of their skipper and two other crew members and the injury of Jones, and where she had an affair with the already married Landon. She, Landon and Taylor were all later assigned to the Liberty 1 mission. Dr. Milo discovered Stewart's corpse when he found the ship submerged in the Forbidden Zone. 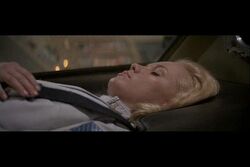 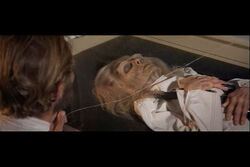