Planet of the Apes Wiki
Register
Don't have an account?
Sign In
Advertisement
in: Items, Locations (APJ), Locations

The Statue of Liberty was a colossal metal sculpture located on Liberty Island in the middle of the harbor of New York City.

The statue was a gift to the United States from the people of France, and represents Libertas, the Roman goddess of freedom, bearing a torch and a tablet upon which is inscribed the date of the American Declaration of Independence, 4 July 1776. A broken chain lies at her feet. The statue was constructed in France over eight years, shipped across the sea, assembled on the pedestal on what was then called Bedloe's Island, and dedicated on 28 October 1886 by President Grover Cleveland. The statue is a symbol of freedom and international friendship, a welcoming signal to immigrants arriving from abroad, and one of America's most treasured icons.

In the year 3978, human refugee George Taylor fled from Ape City with his newly acquired mate, Nova. During the course of several days, Taylor believed that he had been living on a strange, alien world. Following the shoreline, he came upon the Statue's ruins and realized that he was still on Earth. Worse, he deduced that the humans of his own era must have waged a global war, which paved the way for a dystopian future where humans became subservient to evolved apes. The statue was one of the few surviving icons of pre-Apocalyptic human society. Over the course of centuries however, dramatic geological shifts left the statue halfway buried in the sand.

It could be inferred that Dr. Zaius knew of the existence of the Statue of Liberty. It is clear that he was aware of mankind's past, and to some extent, possessed knowledge of humanity's downfall. When Taylor indicated his plan to "find his destiny", Zaius cryptically responded with, "Do not look for it, Taylor. You may not like what you find." In all likelihood, Zaius may have been referencing the Forbidden Zone, but it is just possible that he was speaking of the Statue itself. A large copper statue bearing a human face would have been an artefact of disturbing and heretical significance to one such as Dr. Zaius. Rod Serling, in his early script treatments for the movie, specified that Zaius should have suspicions about humanity's civilized past, "but it must be only an inkling", and that his realization of the truth should not occur until after the discoveries at Cornelius' archaeological site. In contrast, Malibu Graphics' Planet of the Apes: Sins of the Father depicted the Statue of Liberty revealed to a young Zaius by his father Dr. Augustus, Minister of Science.

It was during the early script revisions that the idea for the famous ending to Planet of the Apes was devised. Producer Arthur P. Jacobs recalled, "We were trying to make the audience believe it was another planet, which differs from Boulle's novel in which it WAS another planet. I thought that was rather predictable when we were doing the first screenplay. It's funny, I was having lunch with Blake Edwards, who at one point was going to direct it, at the Yugo Kosherarna Delicatessen in Burbank, across the street from Warner Brothers. I said to him at the time. 'It doesn't work, it's too predictable.' Then I said, 'What if he was on the earth the whole time and doesn't know it, and the audience doesn't know it.' Blake said, 'That's terrific. Let's get a hold of Rod.' As we walked out, after paying for the two ham sandwiches, we looked up, and there's this big Statue of Liberty on the wall of the delicatessen. We both looked at each other and said, 'Rosebud' (the key to the plot of 'Citizen Kane'). If we never had lunch in that delicatessen, I doubt that we would have had the Statue of Liberty as the end of the picture. I sent the finished script to Boulle, and he wrote back, saying he thought it was more inventive than his own ending, and wished that he had thought of it when he wrote the book." [1]

Blake Edwards himself claimed that he came up with the Statue of Liberty ending with former Disney artist Don Peters, adding "As I recall it was pretty much Don". Don Peters, for his part, claimed that it was his idea alone, because he first introduced the ruined Statue of Liberty scenes to the Apes project when he did the preliminary sketches for Arthur P. Jacobs when the film was in development at Warner Bros. [2] However, the twist ending has also been attributed to Rod Serling, whose experience writing for Twilight Zone gives his claim more credence. Mort Abrahams, who as associate producer was very involved in script revisions, said succinctly "That was Rod's ending".[3] Serling's numerous script revisions through 1964 and 1965 show an evolving concept, from the movie being set on an alien planet (as in the book), to the discovery of Earth artifacts in a bomb shelter, to the sight of the famous statue. When asked about the ending himself, Serling said (in 1972), "The book's ending is what I wanted to use in the film, as much as I loved the idea of the Statue of Liberty. I always believed that was my idea." But when asked if the ending was a combination of four or five people thinking exactly the same thing at about the same time, he replied, "That's very possible. Visually, it's an exciting idea because a fragment can be taken from it, and still withhold what it is. That's the beauty of the Statue of Liberty."[1] Speaking to Marvel Comics two years later, Serling shared the credit, saying it was "In collaboration with Jacobs. Yes, it was a wild cinematic scene."[4] In stark contrast to Jacobs' above assertion, Boulle maintained: "I disliked somewhat, the ending that was used - the Statue of Liberty - which the critics seemed to like, but personally, I prefer my own. Since they decided to make the film, they picked this ending. They had that final scene in mind from the first day." [1] J.W. Rinzler's research points to Serling having set the movie on Earth and credits Peters as the sole originator of the Statue of Liberty concept; counter-claims are attributed to publicity boasts and clouded memories.[5] 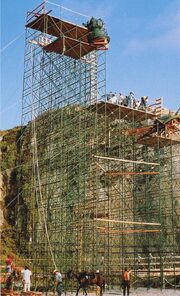