The name of a star, and in the novel by Pierre Boulle, the name given to the son of Ulysse Mérou and Nova; the birth of Sirius, and the prospect of a newly-intelligent human race.

Sirius was conceived through a pairing of his mother and father assigned by the apes in an experiment of sexual selectivity.

Sirius's unique lineage through his father afforded him with greater intelligence not found in the men of Soror for thousands of years. Since his birth he displayed emotions, crying rather than whining compared to normal infant humans, a trait that surprised even his mother. At three months old he was able to talk, an astonishing feat even by Earth standards.

Due to his existence and potential for mankind it led to growing animosity towards the human family from the simian populace. As a result, they took off in Mérou's spacecraft and traveled first to Earth. On the journey he successfully becomes a teacher to his mother, helping her become more rational. Sadly the family discovered apes too had also become the dominant species, forcing the family of exiles to search space for a new home. 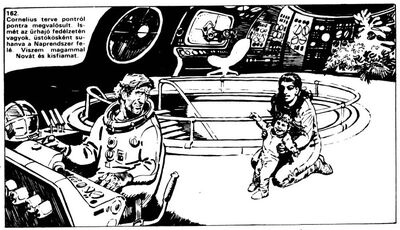 At one point in the Planet of the Apes movie adaptation of Boulle's novel, Nova was due to mirror her namesake from the original novel by being pregnant with the child of Taylor (analogous to Mérou's character in the novel). The scene remained in Michael Wilson's final shooting script as late as 15 June 1967, as he confirmed:[1] "In the penultimate drafts of 'Planet of the Apes', Nova (Linda Harrison) was pregnant With Taylor's (Charlton Heston) child. In this version, Taylor was killed by the bullet of an ape sniper just after he sees the Statue of Liberty. But Nova escapes, vanishing into the Forbidden Zone beyond the Statue of Liberty. The meaning is clear: if her unborn child is a male and grows to manhood, the species will survive. If not, modern man becomes extinct. Such an ending left open the possibility of a sequel long before sequels were discussed. Nova's pregnancy was deleted from the film, I'm told, at the insistence of a high-echelon Fox executive who found it distasteful. I suppose that if one defines the mute Nova as merely 'humanoid' and not actually human, it would mean that Taylor had committed sodomy."[2] Associate producer Mort Abrahams also suggested that, "if she's pregnant that becomes an element of the story... and now we're off to something else entirely."[3] Actress Linda Harrison added, "I remember that we were all set up to do the scene. It was the scene where we say good-bye to Cornelius and Zira, and Taylor asks for the gun. That was the scene where Zira was going to tell Taylor that Nova was expecting. But then the brass huddled in a quick little meeting and they decided that it wasn't the right course to take."[4] The scene was included when Marvel Comics adapted the movie from that version of the script, but had the dialogue altered just before publication. However, the following year the strips were re-printed in colour in Marvel's Adventures on the Planet of the Apes comics with the original 'pregnancy' dialogue restored, probably by mistake.

A different version of the character appeared in the Boulle-penned movie sequel, Planet of the Men. In this unused treatment from July 1968, Sirius was a son born to Nova and Taylor shortly after the events of the first movie. As intelligent as his father, he helped his mother to learn to speak, and at a very young age also began to teach the primitive humans of the planet to speak and to form a society. However, as an adult he was headstrong, and objected to the welcome his father extended to his old ape allies Zira, Cornelius and Lucius. After the humans' victory over the invading ape army, the other hot-headed young generation of humans persuaded Sirius to lead them in a war of conquest over the Ape City. The same young humans ultimately killed Taylor when he tried to intervene, leaving Sirius at the head of a new, aggressive human culture.

When Paul Dehn prepared his own treatment for a sequel in September 1968, titled Planet of the Apes Revisited, he also included the birth of an infant son named Sirius, who is born into a new era of co-operation between the apes and humans. Dehn's story appropriated elements from Boulle's treatment, such as Field Marshall Urus/General Ursus, and he possibly took the idea from there. Both writers may also have read the version of the movie script which showed Nova pregnant. Dehn's subsequent revisions of his screenplay for Beneath the Planet of the Apes did not include Sirius.

In 1988, Adam Rifkin wrote "an alternate sequel to the first film." In Rifkin's Return to the Planet of the Apes, Nova has died but left Taylor a son named Duke. Taylor is later killed by a ruthless gorilla leader, and Cornelius promises to raise Duke amongst the community of humans Taylor had founded in the Forbidden Zone. Ultimately, Duke helps overthrow the gorilla tyrant. However, Rifkin's project was abandoned.[5][6]

Retrieved from "https://planetoftheapes.fandom.com/wiki/Sirius?oldid=57321"
Community content is available under CC-BY-SA unless otherwise noted.