Planet of the Apes Wiki
Register
Don't have an account?
Sign In
Advertisement
in: Items, CE, Evolved Apes,
and 4 more

"He was exposed to the 113. It does something to people that it doesn't do to apes."
―Linda Andersen to Steven Jacobs

The Simian Flu, formerly known as ALZ-112 and ALZ-113, was an artificially created retrovirus designed to cure Alzheimer's disease. The brainchild of Dr. Will Rodman of the Gen-Sys Laboratories, the first virus proved a success with ape test subjects by greatly enhancing their intelligence, and managed to temporarily cure Rodman's own father. In order to make the effects permanent in humans, a second, more powerful and contagious strain was created which ultimately proved fatal to humans, leading to the Simian Flu Pandemic and the rise of the Evolved Apes.

ALZ-112 was the codename of a viral "cure" for Alzheimer's Disease developed over the course of five-and-a-half years by geneticist Dr. Will Rodman at the Gen-Sys Laboratories. Among the chimp test subjects were Bright Eyes, Lorelei, Chambers, Burke and Verdon. A military-sanctioned "variant" of the drug was administered to Burke and Verdon, the latter of whom was later shot attempting to escape.[1] Bright Eyes displayed the desired results, and was to be exhibited during a board meeting, but was killed by security guards after she became aggressive in defence of her newborn infant, Caesar. Funding for the project was cut as a result, but Will adopted Caesar, who inherited his mother's increased intelligence. Will secretly stole samples of the 112 virus to administer to his father Charles, who was himself an Alzheimer's sufferer. Although Charles' condition initially improved, his body gradually developed antibodies against the virus, and he regressed to his former condition five years later. Desperate to create a stronger strain that would not be effected by antibodies, Will reported his unauthorized experiments to Gen-Sys head Steven Jacobs, who was impressed enough by Will's testimony to authorize the creation of the "ALZ-113".[2]

During the first trial, the virus was accidentally released onto chimpanzee handler Robert Franklin after the test bonobo Koba briefly broke out of his restraints and breached one of the viral containers and kicked off Franklin's breathing mask. Although Koba displayed the same increased intelligence possessed by apes subjected to the previous 112 variant, the new virus proved fatal to Franklin. Rodman became aware of Franklin's death, and attempted to halt the tests, but was rebuffed by Jacobs. Unknown to Rodman, Franklin had accidentally sneezed on airline pilot Douglas Hunsiker before dying, thus begining a wave of infections which would later result in a global pandemic. Will had intended to treat his father with the new ALZ-113 formula, but stopped at the last moment - this presumably could have created a second outbreak of the virus among humans. Caesar, who in the meantime had been detained in the San Bruno Primate Shelter, managed to escape his captivity and steal several cannisters containing the virus from Will's house, which he used to increase the intelligence of his cell-mates. He and his followers later escaped the Shelter, precipitating the Monkeygate scandal.[2]

The ALZ-113 allows the brains of apes to replicate its own cells to repair itself at, which in turn grants them heightened intelligence, and can be inherited by the offspring of infected apes. The only physically notable symptom is the adoption of a green tint in the infected apes' irises.[2] . With humans, however, the 113 is lethal as their immune system is weaker than an ape's immune system. Both Malakai Youmans and Natalia Kosar noted similarities between the way Simian Flu affected humans and Ebola, as both are highly contagious and have hemorrhagic fever as a primary symptom.[3] An infected human displays constant nose bleeds before bleeding out of the eyes, ears and mouth before death.

As mentioned by Ellie, a survivor of the Simian Flu, humans that were not killed by the virus were genetically immune to the flu or else they would have died long ago so there would be no danger of the pandemic returning to kill them. In War for the Planet of the Apes, Colonel McCullough mentions that every human survivor still carries the virus.

As told by McCullough in War, the Simian Flu underwent a mutation following the worldwide epidemic. Instead of killing humans, the mutated virus infects the speech area of the brain, causing the infected to lose the ability to speak and reverts their intellect to primal instincts. Even people who are immune/resistant to the virus became susceptible to the mutated virus. This new mutation was so infectious that it can spread from both direct contact and through belongings, which McCullough ordered his Alpha-Omega soldiers to kill the infected and burn their possessions to prevent an outbreak. 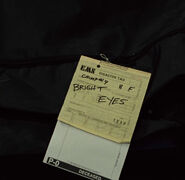 Vials of the virus in a fridge. 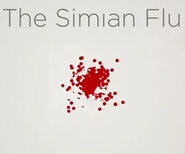 The intro to the Simian Flu educational video. 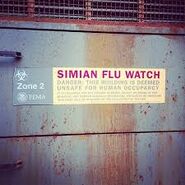 The Simian Flu and You