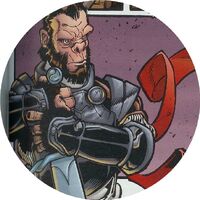 Seneca, a former member of the ape senate in Derkein, has sacrificed his wealth, respect, and status as an ape in an effort to launch a rebellion to try to end the suffering of the human population in hopes to once again restore equality. He is viewed as a traitor that is guilty of insurrection and sedition. There is a reward out for his capture. His brother Fyn faithfully serves as Minister Shiva’s personal assistant, being trusted with her secrets, but passing them to the rebels until he is discovered and killed.

Retrieved from "https://planetoftheapes.fandom.com/wiki/Seneca?oldid=33546"
Community content is available under CC-BY-SA unless otherwise noted.