Kuroda Minoru, better known for horror comics, wrote an epic 250-page manga adaptation of Planet of the Apes for Manga Tengoku Zôkan ('comic heaven - special issue') in 1971. The comic book (which may or may not have been officially licensed) included multiple colour pages featuring pictures from the movie. 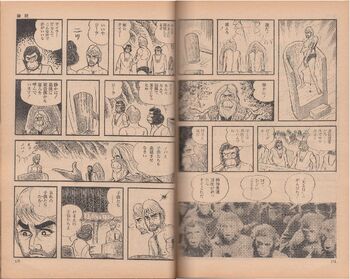 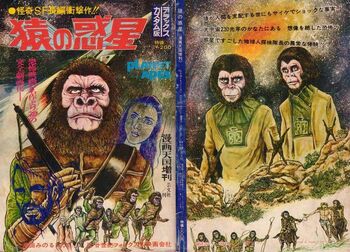 The storyline and artwork closely mirror the movie itself, but a number of extra scenes were added which are unique to this comic. Although no English-language translation has yet been published, these additional scenes are broadly outlined below.

Retrieved from "https://planetoftheapes.fandom.com/wiki/Saru_no_Wakusei_(Manga_Tengoku)?oldid=61582"
Community content is available under CC-BY-SA unless otherwise noted.