Planet of the Apes Wiki
Register
Don't have an account?
Sign In
Advertisement
in: APJ Characters, Orangutans, Deceased Characters,
and 5 more

Minister Sabian was an orangutan who lived in the East coast Ape City in the latter half of the 40th century. He was a high-ranking religious leader among the ape community, and was called upon to bless the gorilla army as it set off to conquer the Forbidden Zone.

He was the predecessor of Dr. Zaius as the Chief Defender of the Faith before retiring. He had very conservative beliefs, Sabian came out of retirement to become the High Patriarch (‘Pontifex Rex’) of Ape City, and formed a powerful alliance with Ursus that aimed to exterminate the human race. 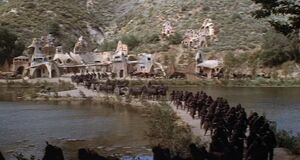