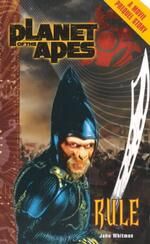 The various human clans began to coalesce under the leadership of Sarai, and developed a highly organised city hidden from the eyes of the ape authorities. However, a visit by an incredulous Ari led Attar to discover it's location, and a brutal crushing of the human population followed, with Thade killing Sarai and most of her community.

Retrieved from "https://planetoftheapes.fandom.com/wiki/Rule?oldid=13883"
Community content is available under CC-BY-SA unless otherwise noted.