Planet of the Apes Wiki
Register
Don't have an account?
Sign In
Advertisement
in: Article stubs, Evolved Apes, Apes,
and 15 more

Movies (CE)
The Royal Ape Family are the ruling family of the Ape Colony within the Chernin Entertainment iteration of the Planet of the Apes story. They are comprised of Caesar and his family and later Khan and his family after they broke away from Caesar's Colony to set up their own.

Caesar with his sons and Maurice and Rocket.

Blue Eyes, Heir and eldest Prince of the Ape Colony.

Blue Eyes with Malcolm and Koba.

Cornelia, Queen of the Ape Colony and her youngest son Milo.

The Ape Colony's youngest Prince, Milo and his human companions Ellie and Alexander.

Caesar witnesses the birth of his youngest son.

Caesar and his eldest son. 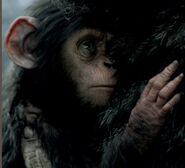 Blue Eyes, future leader of the apes, and future king of the Ape Colony. 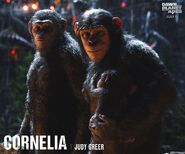 The Royal Family and Rocket