Baker was born in Binghamton, New York, the son of Doris (née Hamlin) and Ralph B. Baker, a professional artist.[1] As a teen, Baker began creating artificial body parts in his own kitchen. One of Baker's early effects creations was the ape-monster 'Schlockthropus', star of young director John Landis' Schlock, as a result of which Landis won a minor cameo in Battle for the Planet of the Apes from producer Arthur P. Jacobs (Landis himself played the monster in Schlock, while Baker had an on-screen cameo in a scene alongside Apes makeup creator John Chambers, who was impressed with Baker's makeup work). Baker would go on to have a long working relationship with Landis. Baker's first professional job was as an assistant to Dick Smith on the film The Exorcist.[2] He received the inaugural 'Academy Award for Makeup' for his work on Landis' An American Werewolf in London. Subsequently, Baker has been nominated nine more times with five additional Oscars, both records in his field.[3] In addition to King Kong, Baker worked with designing ape makeup on Greystoke: The Legend of Tarzan, Lord of the Apes, Gorillas in the Mist: The Story of Dian Fossey and Mighty Joe Young. He claims that his work on Harry and the Hendersons is one of his proudest achievements.[4]

Because of his vast experience in creating ape-like creatures during his long career, Baker was a natural choice to take on the task of creating the ape makeup for a re-launch of the Planet of the Apes movies. The first attempt by 20th Century Fox to revive the series came in 1988 when they invited young director Adam Rifkin to write a new screenplay - an alternative sequel to the original movie titled 'Return to the Planet of the Apes'. The project was put on fast track and Baker was hired to design prosthetic makeup. Days before the film was to commence pre-production however, new studio executives arrived at Fox, which led to creative differences between Rifkin and the studio, and the project was abandoned.[5]

The idea of an Apes revival limped on through abortive discussions with Peter Jackson, until Oliver Stone signed on as executive producer and co-writer in 1993. By January 1995, Stone had secured a scriptwriter, a director and a star as the project neared pre-production. Stone first approached Rick Baker, who had worked on Rifkin's failed remake, to design the prosthetic makeup, and Baker's Cinovation Studios produced an orangutan test makeup, but Stone eventually opted for Stan Winston.[6][7] Winston had no more luck than Baker with the franchise, and while he developed innovative animatronic masks under the auspices of Stone's successor on the project, Chris Columbus (and perhaps under Columbus' successor James Cameron), the film remained in limbo until 1999.

By the time Tim Burton was hired to direct in February 2000, Winston was still considered in charge of the makeup effects, but Burton made the decision to replace him with the returning Rick Baker, with whom he had a long working relationship, that May. Fox had considered using computer-generated imagery to create the apes, but Burton insisted on using Baker's prosthetic makeup. Burton commented, "I have a relationship with both of them, so that decision was hard. Stan worked on 'Edward Scissorhands' and Baker did Martin Landau's makeup [as Béla Lugosi in 'Ed Wood']".[8] Baker explained "I did the Dino De Laurentiis version of 'King Kong' in 1976 and was always disappointed because I wasn't able to do it as realistically as I wanted. I thought 'Apes' would be a good way to make up for that."[9] The resulting movie was Planet of the Apes, released in 2001, in which he also played the role of an 'Old Ape'. His makeup work is perhaps the one aspect of the controversial movie that has earned almost universal acclaim.

Baker had a cameo as the pilot and gunner (with Peter Jackson) who shot down Kong in the 2005 remake of King Kong, and a cameo as a drug dealer with a business card in the John Landis film Into the Night. He was awarded a Doctorate of Humane Letters from the Academy of Art University San Francisco in 2008. 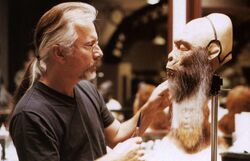 Retrieved from "https://planetoftheapes.fandom.com/wiki/Rick_Baker?oldid=24401"
Community content is available under CC-BY-SA unless otherwise noted.