Revolution on the Planet of the Apes

Revolution on the Planet of the Apes was the main story featured in MR Comics' six-part comic series of the same name. It was written by Ty Templeton and Joe O'Brien, with art by Salgood Sam, Bernie Mireault, Tom Fowler and Art Lyon, and detailed the immediate aftermath of the rebellion shown in Conquest of the Planet of the Apes.

Arthur Bishop Trundy has been elected President of the United States; his advisors and cabinet include Culley Sparks, his defense secretary; the wheelchair-bound Dr. Karl Reich, his science council advisor; and Nora Rhodes, media undersecretary of the Pentagon. The Alpha-Omega Bomb, code-named “Project Churchdoor,” had been overseen by California Governor Arnold Breck, a cruel man aspiring to great power. To make sure the missile never fell into the wrong hands, Breck created the "Inferno Protocol," a destruction plan to be used only as a last resort. Meanwhile, Ape Management reconditions troublesome gorilla Aldo, reassigning him to a secret project at Area 51 in Nevada. His anger at the human mistreatment of apes worsens when he witnesses first-hand the atrocities to which scientists at the base subject their gorilla inmates. The Ares 51 project, initiated by Defense Secretary Sparks, involves a scientist named Dr. Constantine enhancing gorillas' intelligence so they can learn to fly jet planes and perform other advanced tasks. Driven by the power of Caesar's unconscious mind, and by the genetic and biological experimentation, Aldo begins to acquire the power of speech.

The day after Caesar's rebellion, Caesar names Malcolm MacDonald his liaison between humanity and apekind, and imprisons former Governor Breck in a cell. Chief Inspector Kolp transfers his base of operations to a top-secret underground bunker housing Project Churchdoor, the most secure facility on the West Coast. There, he assembles a counter-insurgency commando unit to free Breck from Caesar's army. In Los Angeles, a young pirate blogger named Chris Leung watches Internet footage of Caesar's rebellion until the news feed is terminated for violating the Media Act. His father dismisses the Caesar rumors as a hoax until an ape drives a truck through their wall, bringing the rebellion to their home. Leung's entire family is slaughtered. Leung takes cover, clutching his laptop and vowing to get the truth out, and realizes he must find Caesar.

Meanwhile, at Area 51's Hasslein Air Force Base in Groom Lake, Nevada, Aldo refuses to do his work, and is sent to Dr. Constantine. Aldo overpowers his guards and beats them and Constantine to a bloody pulp, repeatedly screaming a word he has heard from his human masters countless times: “No!” Aldo frees the other Area 51 apes, who slaughter their human trainers and steal several military jets. Aboard a government jet, Nora Rhodes prepares to meet with Caesar. Two military aircraft piloted by Aldo's apes attack; a fired missile blowing a hole in the cabin. Grabbing a parachute, Rhodes jumps from the plane and lands unharmed in the war zone of San Diego. Caesar orders Breck taken away or trial. Atop a nearby building, Kolp and two underlings, Mendez and Alma, spy on the apes. Their plan: to attack at dawn, kill Caesar, and rescue Breck. Chris Leung, meanwhile, takes a video camera to the edge of San Diego's Exclusion Zone to film the war for his blog.

Leung finds Rhodes in the street as Caesar approaches, inviting them to record and witness Breck's trial. Caesar will serve as prosecution, MacDonald as defense, and with humanity acting as judge-and-jury, via Leung's camera. Caesar charges Breck with conspiracy to murder the entire world, citing the Churchdoor project as proof. A moment later, explosions rock the area, as Kolp's commandos rush in, guns blazing. Breck runs for the door as Caesar beats Kolp for killing Armando. MacDonald stops Caesar from killing the man, saying Armando would not have approved. Kolp escapes, leading Breck outside to Alma and Mendez. Breck's team heads immediately for the Project Churchdoor bunker, and descends to a secure facility. Breck threatens to cleanse the world with the bomb if Caesar's troops don't give up within a day. Breck tells Mendez to contact Trundy, but nothing gets through. Rhodes uses Leung's pirate camera to warn the U.S. President of Breck's actions. President Trundy arrives at Fort Liberty in time to hear Rhodes recommend he launch a thermonuclear strike at San Diego. 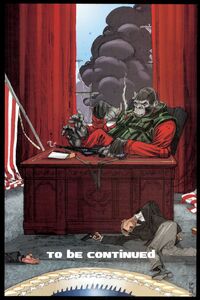 Meanwhile, Aldo's gorillas aerial-bomb Washington, D.C., then engage the human ground forces and storm the White House, looking for Trundy. Eventually, the gorillas take over the War Room. Finally, in the Oval Office, Aldo assumes the president's chair, lighting up a cigar in triumph. Twelve hours later, with no way to reach Breck and the Alpha-Omega bomb, MacDonald begins to lose hope. To his shock, Aldo's gorillas arrive with a squad of fighter jets; even stranger, Aldo can speak. Caesar sends Lisa and the city's ape and human population to seek safety in the mountains as Aldo's pilots lift off to level the complex. MacDonald opts to stay with Caesar, and face his destiny. Breck contacts Trundy, saying he has everything under control. Aldo's fighters disrupt the call, bringing the building down around him. Apes storm the launch bay, slaughtering Breck's followers. Kolp leads his commandos to the lower levels, shooting MacDonald as he proceeds. In his death, MacDonald hits a trigger, causing the missile to leak radioactivity. With no choice but to save mankind by destroying civilization, Trundy initiats the Inferno Protocol, raining nuclear weapons down on the cities of North America. Caesar leads his people into the mountains, carrying MacDonald's body with them, and leaving Kolp's soldiers behind in the radioactive city. Thanks to Caesar's psychic dreams, the apes (starting with Lisa) began to speak. However, he soon stops dreaming events into existence, which leaves him wondering if he has ultimately changed the future, or caused it.[1]