Planet of the Apes Wiki
Register
Don't have an account?
Sign In
Advertisement
in: Apes Spoofs and Imitations

"Legend has it, almost 3,000 years ago, a simian civilization of super-intelligent apes struggled with man to gain control of this planet. In the end, man conquered ape after a brutal battle, which saw him destroy the ape, his culture and society. After this battle, man tortured and killed all the ape prisoners by piercing their eyes with a red-hot poker. One of the prisoners, who was also the leader of the apes, vowed they would return from the dead to avenge man's brutality - at a point in time before man destroyed Earth himself. That time is now." 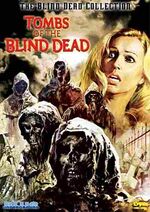 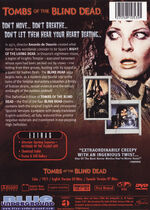 
In 1971, director Amando de Ossorio created what horror fans worldwide consider to be Spain's Night Of The Living Dead. In the 13th century there existed a legion of evil knights known as the Templars, who quested for eternal life by drinking human blood and committing sacrifices. Executed for their unholy deeds, the Templars bodies were left out for the crows to peck out their eyes. Now, in modern day Portugal, a group of people stumble on the Templars abandoned monastery, reviving their rotting corpses to terrorize the land. In Ossorio's nightmare vision, they rise from their graves, hunting only by sound in a quest for human flesh. The Blind Dead saga begins here, as a modern-day tourist trip to the ruins of the Templar monastery unleashes a frenzy of lesbian desire, sexual violence and the unholy onslaught of the eyeless undead![1]


A recut version of Tombs of the Blind Dead was apparently screened in the U.S. under the title Revenge From Planet Ape in an effort to capitalize on the on the success of Planet of the Apes. An alternate opening sequence (included in the 2005 DVD release of Tombs..., courtesy of Harry Guerro, "a serious collector of rare 16mm and 35mm film prints") was added to make a dubious connection between the two films. It includes some ludicrous narration over altered opening credit footage which asserts that the 'Blind Dead' were in fact a group of long-dead Apes risen from the grave to take their revenge on the human race that killed them and destroyed their society. One can only assume that this outrageous idea was inspired by the fact that the sunken, noseless but bearded faces of the Blind Dead look very slightly simian in nature. The film was clearly unsanctioned at the time and the handiwork of a dodgy distributor. 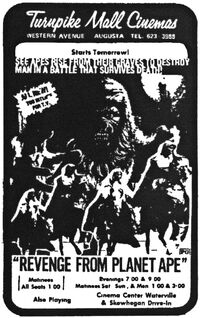 There was some suggestion that this might be a bit of mischief on the part of the DVD makers. However, fans recall it's appearance at drive-ins, including Augusta, Maine and Anderson, South Carolina sometime around 1978, and an ad (courtesy of Temple of Schlock) incorporating the cover of Marvel Comics' Planet of the Apes Magazine #13 (October '75) provides further proof.[2][3][4] The only other differences between Revenge From Planet Ape and Tombs of the Blind Dead are a few scene excisions: all the raunchy make-out shots, a flashback of the knights killing a girl in some sort of Templar ritual, and a minute-long scene where we learn about the Templars from a book: roughly 30 seconds of new material and about 2 minutes removed.[5]