Return To Yesterday was a 2005 fan-produced comic strip written and illustrated by Mike McColm, featuring the characters from the Planet of the Apes TV series. 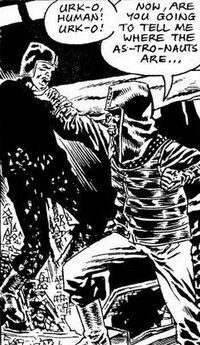 We join the fugitives toiling on a farm. Galen's narrative tells us it is eleven years since they arrived and they have lived here as farmers for a half decade. Virdon is frustrated to think that he will never return to his home and his family, and he argues with Burke and Galen. Later, their friendly ape neighbour, Salo, visits them with his human female servant, Teorema, bringing news from Central City. He sadly reports that Urko has become a General after his victory over Jehan's rebellion (see 'Blow For Blow'), and with no resistance from Zaius, he has launched an all-out war against humans. Disturbed by noises from their crops, Salo shoots at what he assumes is a bear, only for the group to discover it is a human girl, dressed in animal skins and unable to talk. Salo tells them more and more humans are becoming like this, since they have been driven from the towns. He also remembers that a shooting star was spotted a few days earlier heading to the Forbidden Zone. Alan decides he has to find out if this could be another spaceship. Burke and Galen reluctantly follow.

In Central City, Urko has also been told of the sighting and sets out with his son for the Forbidden Zone, where meanwhile the fugitives have discovered the ruins of New York. They find a working spaceship, only to be immediately captured by mutated humans wearing masks, who put Virdon and Burke in a cell and take Galen to be tortured by their leader - Mendez. In the cell another figure sleeps in a corner. Realizing it has to be someone from the other ship, the astronauts are amazed to find Verina (see 'From Out Of The Sky'), who has stolen a ship and returned to rescue them alone. Fearing that Mendez has gone insane, his deputy, Karno, frees the trio and helps them rescue Galen, on condition they will take him with them, but when they return to the ship they find a pitched battle between the mutants and Urko's invading soldiers. When Galen hesitates to enter the ship, Urko is able to seize him and injure Virdon. Burke leaps out to defend Galen but is shot and killed by Urko's son. In turn, Urko is shot dead by Mendez, who is then incinerated by the jets of the ship as Virdon and Verina take off. Galen buries Burke back at the farm they called home.

In the distant past, Virdon's son is taking him to see a memorial for all the astronauts lost in space. On the way he is handed a flyer for Armando's circus by a chimp who looks strangely familiar...