Quest for the Planet of the Apes

Quest for the Planet of the Apes was a unique movie-oriented original story issued between the adaptations of the fourth and fifth movies which appeared in Marvel Comics Planet of the Apes Magazine. The story, written by Doug Moench with artwork by Rico Rival and Alfredo Alcala, was intended to bridge the gap between Conquest of the Planet of the Apes and Battle for the Planet of the Apes and help continuity. As Marvel's adaptations were based on shooting scripts rather than the actual movie, their version of Battle featured Governor Breck as the leading villain, rather than Kolp. Thus, Quest also has Breck as one of its main characters. The story itself treads much the same ground as Battle, while also depicting the early difficulties of a new society and explaining how Mandemus came to be the guardian of a cache of weapons and how the future leaders of the mutant society had survived the nuclear holocaust. 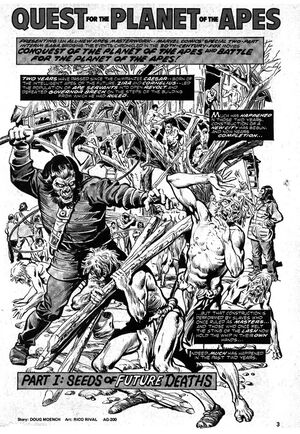 1993 - Caesar succeeded in building his new community with those apes who followed him out of the city following their revolt. Former Governor Breck, Alma and Mendez had been taken prisoner along with other volatile humans, whom the apes kept alive as a work detail after Caesar's rebellion. However, he had concerns that humans were being mistreated at the hands of apes still coming to grips with their newfound freedom and rapidly growing mental faculties. Aldo challenged Caesar to a quest to determine leadership: he and Caesar must journey to the human city and each bring something back; whoever found the 'best thing' would rule. Caesar accepted. MacDonald, knowing the dangers of entering a city only a year after a nuclear war, urged him not to go. To make matters graver, Lisa announced she was pregnant.

The city was a scene of horror, and Caesar knew immediately what to bring back: the knowledge and vision of what strife can cause, and what peace can avoid. Aldo found a stocked armory and filled a cart with rifles. Back in Ape City, Breck, Mendez, Alma and others revolted. Mendez killed an ape guarding the stockade and escaped with his comrades. Breck's followers seized Aldo's cart. An old orangutan named Mandemus leaped in front of a bullet intended for Caesar. The apes killed most escaping humans, but a few, including Breck, fled into the woods. Caesar raced after Breck. He pummeled his former master badly but did not kill him, knowing that would make him no better. Letting Breck return to the Forbidden Zone, he headed home. Aldo challenged Caesar to a fight. Aldo was stronger, but Caesar was far smarter and lured Aldo into a tree, snaring him in a rope-trap. Mandemus suggested they destroy the guns, but Caesar suspected they may some day need to protect themselves against those who would do evil. Mandemus scorned the idea, so Caesar made him the Keeper of the Armory to make sure they were never used for evil. For a time there was peace between apes and humans, though Aldo continued to bide his time until another opportunity to challenge Caesar presented itself.