Max Nunes, Haroldo Barbosa and others

Planeta dos Homens (translation: Planet of the Men) was a humorous program produced by Brazil's TV Globo and broadcast weekly from 15 March 1976 to 3 January 1982 at 21:30 every Monday. The shows writers included Jô Soares, Max Nunes, Hilton Marques, Haroldo Barbosa, Afonso Brandão, Luis Fernando Veríssimo, Redi, Sergio Rabello, Alfredo Camargo and J. Rui, and it's director was Paul Araujo. The Apes which appeared in the program were created and designed by Orival Pessini. He would continue to work, with new characters and make-ups, in other comedy and childrens programs, most notably Pátropi and Fofão. 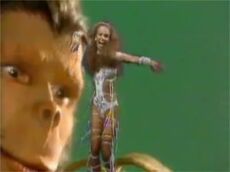 The opening of Planeta dos Homens became one of the most famous in Brazilian television: an Ape-man takes a banana and peels slowly, little by little revealing the figure of a dancer (Wilma Dias). Then the roles are reversed and a monkey appears waving from within the banana as Dias peels. The sequence was created by Hans Donner, and according to him the sequence was the first to draw the attention of the Brazilian public to the possibilities of computer graphics. The show was a comedy program of short sketches, averaging about five minutes. The sketches were recorded in the Phoenix Theater in Rio de Janeiro, in front of an audience. Initially, they recorded outdoor scenes showing the adventures of Sócrates, Charles and Gibinha, but once the series started these were recorded in studio.

It was from a parody concept of the classic film 'Planet of the Apes' that Max Nunes and Haroldo Barbosa developed the 'Planeta dos Homens' series in 1976, serving as the framework for sketches of satire based on customs, social commentary and parody of radio and television programs. It was the continuation of a type of anti-war satirical humour that the writers had begun with the program TV1-TV0. Charles (Roberto Azevedo), Sócrates (Orival Pessini) and Gibinha (Clarice Piovesan), from a planet inhabited by a race of super Apes, are sent to Earth to investigate the behavior of men and discover why they cannot overcome problems such as hunger, war and pollution. The intelligent Apes, with make-ups created by Orival Pessini, appeared in all episodes. Sócrates, the philosopher of the group, lived constantly puzzled by the contradictions of mankind. Charles showed signs that he was evolving and becoming human. 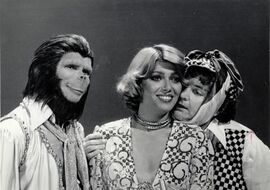 From March 1977, Planeta dos Homens featured slightly longer sketches, each about ten minutes on average. Political satire became part of the agenda, with jokes about inflation and the cost of living, as the military government seemed to be loosening it's strict censorship. In a new introduction, the Ape-man emerged from inside of football that had been cut in half by a knife. Dressed in the shirt of the Brazilian football team, he danced and played football.

After March 1981 the show was written by a team of writers who did not have any involvement with the original show. Haroldo Barbosa and J. Rui had died a year earlier. Max Nunes, Hilton Afonso and Marques Brandão were writing the new program, Jô Soares, Viva o Gordo. Luis Fernando Verissimo, Jesus Rocha, Alfredo Camargo, Marcos César and Expedito Fagion maintained the identity of the program until its end in January 1982. [1] [2]

Retrieved from "https://planetoftheapes.fandom.com/wiki/Planeta_dos_Homens?oldid=60684"
Community content is available under CC-BY-SA unless otherwise noted.