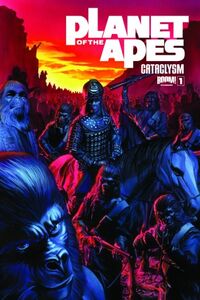 "8 years before a man named Taylor fell from the stars... Ape society is in a rare time of pace and prosperity. The rigid caste system is still firmly in place but some old chimpanzees are out to smash old taboos. Humans can't speak and are considered animals. They are banned from the city. All apes believe in the Lawgiver's most sacred commandment, Ape Does Not Kill Ape. Or so it would seem..."