Planet of the Apes Wiki
Register
Don't have an account?
Sign In
Advertisement
in: Malibu Graphics Issues

"Listen to me, humans! Listen to your master, General Ollo! You live to serve me, and now, one of you is about to die for me!"
―General Ollo

Synopsis: In Ape City, gorilla military leader, General Ollo presides over a gladiatorial combat duel between two humans. The fight is overly quickly, and Ollo grows bored. To spice things up, he pits two apes against one another. One of the ape warriors protests, declaring that such a game is in violation of the most sacred law of the apes – "Ape shall never kill Ape". Ollo has little regard for the old traditions however.

Moments later, one of his lieutenants approaches him and announces that the chimpanzee physicians cannot determine why Ollo's son, Grunt, is a mute. Ollo conspires to destroy his child along with Ape City.

Meanwhile, the leader of Ape City, Alexander, suffers a personal crisis of conscience. He does not feel that he can live up to the expectations of his late grandfather, the ape hero, Caesar. In frustration, Alexander destroys a stone bust of Caesar. His confidante, Jacob rushes into Alexander’s hut upon hearing the commotion. Alexander explains his situation and decides that he must follow in his ancestor's footsteps and mount and expedition into the Forbidden City.

Elsewhere, two gorilla soldiers come upon the addle-brained Grunt amongst a grove of trees. They begin teasing him for being a mute, but Grunt springs into a violent rage and savagely murders the two guards.

Later, a gorilla posse lays siege to a small human settlement. They murder a young woman, but her son, Simon, manages to escape into the woods.

Alexander and Jacob reach the outskirts of Ape City. As they approach the Forbidden City, a human named Max leaps out from the trees and attacks Alexander. Jacob rises to his friend's defense, until a pregnant chimpanzee named Coure intervenes. She calms Max down and explains that he is somewhat overprotective of her, and perceived Alexander and Jacob’s presence as a threat.

All four trek deep into the Forbidden City until they find the remains of what was once San Francisco. They venture into the subterranean caverns of the old Ape Management facility whereupon they find a nest of horribly disfigured human mutants. 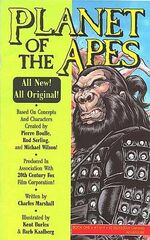