In 2001, acclaimed director Tim Burton released a new version of Planet of the Apes. This version was an entirely new movie rather than a remake. It failed to find it's audience, but the comics were a different matter. Merchandising king, Dark Horse Comics, quickly produced their own comic adaptation of the movie and started pumping the market with new series and titles spun-off from that fictional universe. The comic books proved to be fairly successful and published nine original comic adventures (also collected into three original graphic novels) before passing into cancellation as a result of the poor response to the movie which spawned them, and the abandonment of plans for a movie sequel.

The Dark Horse original comic series began with the three-issue series Planet of the Apes: The Human War, set a generation beyond the events of the movie, and concerned with the central characters Esau and Seneca, struggling to achieve the failed dream of ape/human harmony. The following six issues, leading on directly from The Human War, were simply titled Planet of the Apes issues #1-6, although when all the issues were collected as graphic novels, issues #1-3 (written by Ian Edginton, with art by Adrian Sibar, Paco Medina, Norman Lee and Juan Vlasco) were billed as Planet of the Apes: Old Gods and issues #4-6 (written by Dan Abnett and Ian Edginton, with art by Sanford Greene, Paco Medina, Adrian Sibar, Norman Lee, Pop Mhan and Juan Vlasco) as Planet of the Apes: Blood Lines. The first three-comic series was published in September to November 2001, and the second series in December 2001 to February 2002. The graphic novel collections were published in February 2002 and May 2002 respectively. 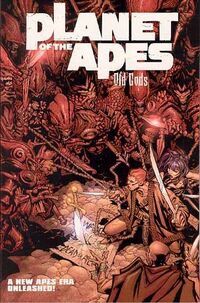 Anything that could have possibly gone wrong since "The Human War" did. The human rebel Esau and the ape leader Seneca were facing a trial for crimes against the ape state. Once triumphant, they now awaited a hangman's noose, having been captured by the implacable Commander Kharim. Never in their wildest dreams did they think they would be rescued mere seconds from certain death by the once great gorilla warrior (and Kharim's grandfather) Attar! But Attar had an ulterior motive. He had received a cryptic message that could finally lead him to his friend, the long-disappeared Ari, and he escaped his decades-long island imprisonment. He would need Seneca and Esau's help as he travelled through the desolate badlands to find her. Hunted by Kharim, their rebellion now a fading dream, they headed deep into the uncharted wilds where they found a besieged outpost of apes and humans, masters and servants, fighting side by side in a battle with a primal, ancient evil - the Chimerae. Our heroic trio took the fight to the savage apes who had been besieging the remote, embattled township. They successfully followed them through the jungle back to their lair, but they were not prepared for what they found... the dark side to the origins of ape and human alike. The savage apes' home was, in fact, the lost ruins of the first Ape City abandoned centuries ago! With the help of a fearsome human girl known as Crow, they escaped the Chimerae and continued on their quest. 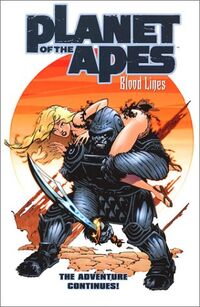 The quest for answers continued, as Esau, Seneca, Attar, and the heroic human slave girl, Crow fled from the vicious pursuit of Lord Scarak and his Ultimar ape soldiers. When they made a stand in a snowy forest, all seemed lost as Esau was severely wounded and left for dead, and the others were quickly outnumbered. A mysterious forest legend, Keyser, a warrior driven out of ape society due to his belief in ape/human equality, provided a rescue... but was he saving our heroes for a worse fate? Keyser stood idly by as they were dragged to inevitable death by an angry human mob led by Ewan. But just as the axe blade fell, a gunshot rang out! It was Esau, Seneca's human ally, and a dead-eye shot, at that. When the Ultimar apes returned to wipe out the human camp, Keyser gave his life fighting alongside his new friends to allow the humans escape. Though their hides were saved - for the moment - mysteries remained to be solved. What of the side-tracked search for Ari, the reason for Attar's arduous journey into this wild, remote landscape far, far away from the ape city of Derkein? Would Attar, the once imposing military captain, return to Derkein to try to stop the bloodshed, even if it cost him his life? Would Seneca, formerly of the ape senate, lead the resistance forces proudly against his ape brothers? And, would Esau, the human rebel leader, stand at Seneca's side and rid the planet of their ape overlords...forever!?

Retrieved from "https://planetoftheapes.fandom.com/wiki/Planet_of_the_Apes_(Dark_Horse_Comics)?oldid=40260"
Community content is available under CC-BY-SA unless otherwise noted.