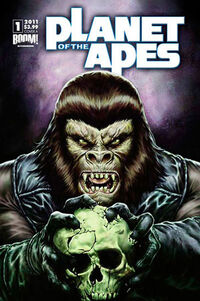 Get your hands on these damn dirty Apes!

"Beginning an all-new series that takes place before the original 1968 Planet of the Apes movie in the continuity of the first five films! Ape society has reached a new golden age. But there are ripples of dissent in both the ape and human ranks. Tensions will rise and soon all will be caught in chaos! And amidst all this uncertainty, what is the fate of...The Lawgiver?"[1]

The first story arc featured was The Long War, written by award-winning novelist Daryl Gregory, with art by Carlos Magno, and set in the Citystate of Mak in 2680 A.D. (a decade after the Lawgiver's coda in Battle for the Planet of the Apes). As Daryl Gregory explained. "The species have been living side by side since the nuclear war 600 years earlier. The ape-human civilization, after many setbacks, is finally back to steam-age technology. There are factories, airships and steamboats, and the possibility to do more. Apes are definitely the upper class, but humans are not yet mute savages roaming the forests."[2] "In the city-state of Mak - which is not Ape City, but a larger metropolis somewhere west of New York - the apes have become the upper class, and the humans largely stick to a ghetto called 'Skintown'."[3] "If Ape City is New York, then this is Chicago."[4] "It's the age of the Lawgiver, the Moses-like figure referenced throughout the movies, and played by John Huston for a few minutes in the last movie."[3] "I'm going with John Huston as my guide, and he's definitely the character we met at the end of 'Battle'."[4] "The key question is, "if" the Apes universe is a closed time loop, what happened? Why is it that when Taylor arrives 1,300 years later, ape society is practically agrarian, and humans are in such a fallen state? We're going to start providing some possible answers." "It starts with an act of violence that disrupts the status quo of the society, which leads to insurrection, which leads to ape-human war. We can follow this story for years, as war sweeps across the planet."[2]

Subsequent story arcs, following on from The Long War, included The Devil's Pawn and Children of Fire.

Retrieved from "https://planetoftheapes.fandom.com/wiki/Planet_of_the_Apes_(BOOM!_Studios)?oldid=54965"
Community content is available under CC-BY-SA unless otherwise noted.