To solve the problem of trying to have enough material to reprint strips in a weekly comic from the simultaneous American monthly magazines, Marvel UK continued the title by running the Marvel strip Killraven from the American "Amazing Adventures" comic, but stuck ape heads on all his opponents so he was fighting apes instead of Martians! Killraven's name also changed - to Apeslayer. The early strips had been written by Gerry Conway (initially with Roy Thomas), with pencils by Neal Adams and then Howard Chaykin, and inking by Frank Monte and then Frank McLaughlin. Later strips were written by Marv Wolfman and later Don McGregor, with pencils by Herb Trimpe, and inking by Frank Giacoia followed by Yolande Pijcke. The experiment was short-lived however, and the UK fans, judging by the letters pages, were less than impressed with the hastily-put-together story of bionic apes from Mars, albeit a comic that no other Apes fans were offered. 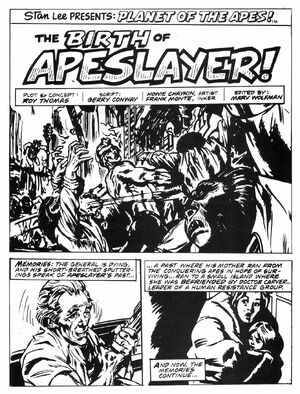 'The Masters', simian aliens from Mars, invaded Earth, enslaving a pocket of humanity still living in the ruins of Earth's cities. Human scientists, brainwashed to work for the simians, acted as a controlling force known as 'the Generals', while war machines known as drone tripods decimated the planet beyond its post-nuclear state. The Masters captured and brainwashed a scientist named Raker, making him a tyrannical General and placing him in charge of gathering human youths for gladiator training. Despite the aliens' control, Raker secretly plotted against them, searching for a youth with the potential to throw off the yoke of slavery and defeat the invaders permanently. General Raker ordered a boy named Jonathan Dozer to gladiator training. Over the next five years or so, Jonathan excelled in swordplay, karate, savate and wrestling under the tutelage of a cruel alien ape named Warlord. Besting all his opponents, he earned the name 'Apeslayer'. Eventually, he escaped the aliens, injuring Warlord, to Staten Island aboard a homemade raft. There, he met a resistance cell called the Freemen (including Mala, Arrow and Socrates). Apeslayer lived among the Freeman for the next six years, eventually becoming their leader.

Apeslayer and the Freemen decided to breach Raker's defenses and kill him for his atrocities. Making his way to the General's office, he fatally impaled him with a piece of broken machinery. Raker's injury broke the aliens' hold over him. He thanked Apeslayer for freeing him and revealed the secrets of Jonathan Dozer's past. Raker told Apeslayer he had a special power that would allow him to defeat the aliens. They headed back to Staten Island, felling a drone tripod along the way. Warlord reported to the Masters that Apeslayer had followed their clues and would soon be captured at LaGuardia Airport. Warlord's face and arm had been replaced with cybernetic implants, his need for revenge grew strong. Apeslayer and his followers made their way to the airport, where they found a huge cache of weapons. It was a trap, and the Freemen were quickly subdued. Sandra 'San' Simian, a human molecular biologist working for the aliens as the head of their Alteration Division, watched the gladiatorial games with Warlord. In the 'Arena of Mutants', Apeslayer killed several mutant apes. Warlord entered the arena, slammed him unconscious with his metal arm and told guards to prepare him for surgical experimentation. San Simian intervened, saying he could be put to more useful purposes, such as leading them to other Freemen groups. San later had a change of heart, summoning a pet mutant named Grok Zom. The two stormed the prison and rescued Apeslayer and the Freemen. San and Zom led the men to safety in the ruins of Yankee Stadium. Warlord jumped into the arena to kill Apeslayer himself but victory went to Apeslayer. He let the alien go, warning that if Warlord continued enslaving humanity, he'd be shown no such mercy in the future.

Retrieved from "https://planetoftheapes.fandom.com/wiki/Planet_of_the_Apes:_Apeslayer?oldid=30254"
Community content is available under CC-BY-SA unless otherwise noted.