Planet of the Apes Wiki
Register
Don't have an account?
Sign In
Advertisement
in: Comic Books, Books, Dark Horse Comics

In 2001, acclaimed director Tim Burton released a new version of Planet of the Apes. This version was an entirely new movie rather than a remake. Merchandising king, Dark Horse Comics, quickly produced their own comic adaptation of the movie (adapted by Scott Allie, with art by Davide Fabbri, Christian Dalla Vecchia and Christopher Ivy), and started pumping the market with new series and titles spun-off from that fictional universe, such as Planet of the Apes: The Human War, Planet of the Apes: Old Gods and Planet of the Apes: Blood Lines.

Telling the story of astronaut Leo Davidson, the adaptation followed the film closely, adding its own narrative style to keep the title fresh. "we do follow the story, but Scott Allie came up with a great first-person narrative device," said Philip Amara, editor of the Dark Horse Planet of the Apes line. "At different points in the comic, you get insight into the mind of Ari, the chimp activist, and Daena, the savage girl. Getting into the mind of a character is a great way to add dimension to an adaptation." The graphic novel was published in July 2001, and was also issued as a comic series for the UK market in July and August 2001. 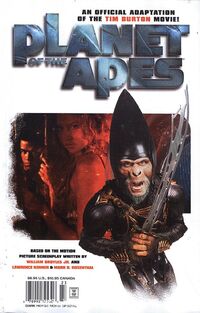 In the year 2029, while conducting vital research in space on apes enhanced with human DNA, the crew of the starship Oberon investigated a strange anomaly. Pericles - one of the genetically enhanced chimps trained as a pilot by Leo Davidson - was given the task of investigating the odd occurrence in a prototype space pod. When Pericles disappeared, Leo disregarded all orders and headed out to find his friend. Once caught in the grip of the anomaly, Leo was pulled into a time and place that he could never imagine... the Planet of the Apes! What he experienced there was almost beyond his belief: a world where gorillas and chimps were the dominant species... a world where humans struggled to survive in the wild beneath the heel of ape rule. With the help of a sympathetic chimpanzee activist named Ari, Leo tried to evade the gorilla army led by the sinister Thade. However, with Leo’s arrival came a change in the balance of power. Now, a small band of humans and apes fought together to change the planet's future.

Dark Horse Comic's Planet of the Apes movie adaptation was also serialised for the UK market by Titan Comics in 2002 in five glossy magazine-sized issues. Issues: