The initial plan for the movie envisaged all out-door filming taking place on the 20th Century Fox ranch property, but this proved impractical. Instead, filming was relocated to begin in Utah and later move to the ranch and the studio sound stage.[1] The scenes where the spaceship crash-lands in the lake were filmed at Lake Powell, which is formed by a dam on the Colorado River on the Utah-Arizona border.[2] The final shooting script for the movie pinpoints some of the locations that had been selected for specific scenes; the crash site was to be filmed in Lake Powell at Lone Rock; the astronauts trek was to take place on 'ochre dunes', 'black dunes', 'gray area', 'crazy canyon' and 'wire grass canyon'.[3]

Creative Makeup Designer John Chambers noted the problems faced by the ape actors in the seering heat of the first Apes location shoot: "[Applying the makeup] wasn't uncomfortable, after they got used to it the first time, and they didn't perspire! We were up with 120* in Arizona, but there was no trouble - it was amazing! We did keep them cool, we had special refridgerated trailers for them, and we had sixty-foot makeup trailers. No one ever did this before. This is what kept them under control. We never lost one minute of production time due to makeup faults or slowdowns. I have never worked with such professional attitudes - no complaining or anything with any of the actors in any of the films. It was a challenge to them, and everyone loved it."[4] Nevertheless, on the first day of filming, shooting the desert trek in Page, Arizona, (May 21, 1967) Charlton Heston noted that "The heat is bad here. One of the other two actors playing astronauts (Jeff Burton) passed out from the heat."[5] 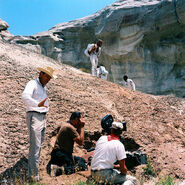 Map of the Lake Powell region in 1967

Lake Powell in 1967, half way through its artificial flooding 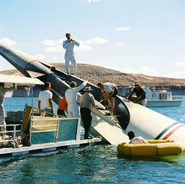 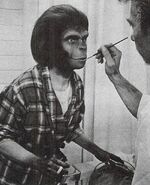 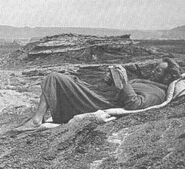 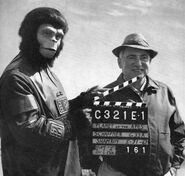 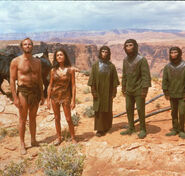 Scenes were done during dress rehearsal with Apes of all sizes and colors saying their piece while smoking pipes, cigarettes (in long holders), and cigars. Some wore glasses, aprons or any crazy-looking hat they could find lying around the prop-rooms. Gorillas played poker with men clad in rags, and chimps danced with the script girls. The most comical side of Planet of the Apes also, proved to be the most serious problem faced by the filmmakers... the make-up. Not since The Wizard Of Oz had there been a call for such odd transformations. Only three main types were required for Oz, but here there were to be four leading orangutans, three chimps, a score of gorillas and literally hundreds of extras who would also appear in make—up. The extras wore masks that slipped over their heads, topped with wigs and held closed by a substance known as velcro (the stuff on the bottom of the stewardess' shoes in 2001: A Space Odyssey). For the Apes seen in close-up throughout the film, make-up had to be specially modelled over life-masks, and applied piece by piece to the face. One of the pieces was a curved upper lip and nose, which fitted over the actor's own nose and produced the ape-like curve of the face. Only problem with this was that the performer's own nose was covered. So for the duration all Apes had to breathe through their mouths. Another curved appliance was fitted over the chin. A curved strip over the brow-ridges, a pair of over-sized ears, sideburns, beard and wig finished the job of turning human actors into Apes. Each piece of the make-up was made of latex rubber, baked after being molded from life-masks for an exact fit. The hair was composed of individual strands fitted through a thin gauze material. The webbing was then pasted to the actor's face with 'spirit gum', a rubber adhesive. After each separate piece of the make-up was fitted, the rubber ends of the pieces were smoothed into paper-thinness and glued to the face. The entire face was then treated to a coating of grease-paint. Shadows, added with grease-pencils, and special make-ups completed the final phase.[6]

"When there were crowd scenes or something like that, we had about 78 to 80 make up personnel." "There was no time to remove the appliances at mealtimes, and we had to make sure the actors could eat well, or they'd weaken and slow down their work. The makeup allowed them to open their mouths okay, but they had to at first use a mirror to show them where to place the food! They had to shove the food clear through the ape's outer mouth into their own inner mouth, so to speak. But they soon learned to do it without mirrors. They find it is easier to chew solids cut into small cubes. Drinking is done through straws. Smoking is done through long cigarette holders - and James Whitmore had to find a long stem for his pipe. They must avoid sloppy foods like stews. The actors have never complained about not being able to carry on their normal feeding habits or other activities. We had to make them comfortable or their ability to act would have been affected. We use long applicators that can be used to clean out noses - but they take inhalers and pills that dry out their noses - same type stuff prescribed for allergies."[4] - Creative Makeup Designer John Chambers. 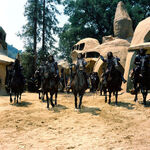 "We were up at Point Dume, which is where we shot the ending - the Statue of Liberty, the caves, all that stuff. We were out there quite a while, a good week or more: the first day we met at Fox, we were made up and then driven all the way out to Dume (over an hour driving). Then, that night, we had to be driven all the way back to Fox and have the makeup taken off. That first day was just insane. Chuck was the one who said, 'Look, you've got to do something for Roddy, Maurice and Kim', and so, they got us a helicopter and took us back and forth that way from then on. That cut the time down considerably." - Kim Hunter[7] 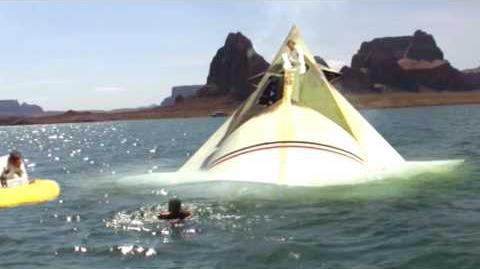 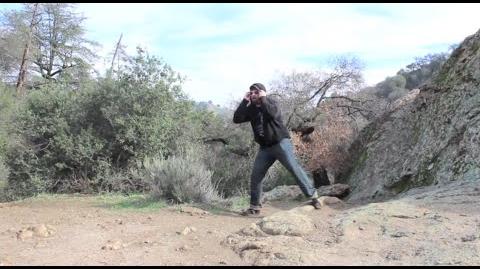