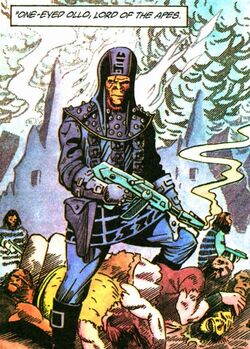 General Ollo was the leader of the 'Aldonites' - followers of the beliefs of General Aldo in the decades after the establishment of the Ape City. His son, Grunt, was one of his greatest resentments due to the fact that he couldn't speak and for this reason, he wished for his son's death. He wanted gorillas to be in control. He allied with the 'Forgotten Apes' and later the Tenctonese, but was killed by the resurrected spirit of Breck.

Retrieved from "https://planetoftheapes.fandom.com/wiki/Ollo?oldid=37069"
Community content is available under CC-BY-SA unless otherwise noted.