The Oberon space station is an important location in the 2001 Planet of the Apes movie. It is where the beginning of the move takes place.

The Oberon was involved in research, including the genetic manipulation of primates in order to use them as expendable pilots for exploration vehicles. Commander Karl Vasich was in command of the vast station, and his crew included Lieutenant ColonelGrace Alexander, Major Frank Santos, Major Maria Cooper, Specialist Hansen, Molly Benavides and Captain Leo Davidson. Alexander was responsible for the consignment of chimpanzees, gorillas and orangutans on board, while Davidson trained them in a space-pod flight simulator.

In February 2029, the Oberon encountered a giant electromagnetic storm which sent garbled radio and television broadcasts of Earth from across human history toward the station. Vasich decided to send out Leo's favourite chimp - Pericles - to see if conditions were safe to send out human pilots to explore the storm. The 'Alpha Pod' carrying Pericles quickly vanished, and Vasich declared it unsafe for further exploration. However, Leo took 'Delta Pod' and followed the chimp's course. He quickly lost contact with the Oberon. Shortly afterwards, the broadcast signals being received by the Oberon included what looked like Vasich as an old man, sending a distress signal. Vasich gave the order to search for Leo.

As the station approached the storm, it too was sent plummeting out of control onto the surface of the planet Ashlar. There, it hit the surface in a devastating crash which killed nearly half of the crew. With no hope of escape, and no rescue mission from Earth (possibly because they had also traveled through time), the survivors tried to build a settlement, increasing the genetic manipulation of the apes in order to help them with manual labour and to combat the hostile native life forms of the planet. Molly bore Leo's son David, while a chimp called Aspasia bore Pericles' genetically-enhanced son Jonathan. After many years, having defeated the natives, Jonathan led the apes in a bloody revolt against the humans, slaughtering most. Jonathan became known as 'Semos', and the apes and few human survivors finally abandoned the ruins of the Oberon. As centuries passed, Semos became revered as a god of the apes, and a sacred place in the Forbidden Zone where he would return was known as 'Calima' (later revealed to be a partially obscured sign aboard the Oberon, which had read CAution LIve aniMAls).

Leo emerged from the electrical storm in 5021, thousands of years after the Oberon, and also crashed on the surface of Ashlar. Receiving a homing signal from the space station, he single-mindedly escaped from ape captivity to find his colleagues. Upon arrival however, he found the ancient, decayed wreckage of the station. He realised the nuclear power cells on the ship had continued sending the homing signal all this time, and was able to access some of the log recordings of Vasich and Alexander from after their crash and discover their fate - the apes and humans he has encountered are descended from the Oberon crew. He was also able to use the surviving rocket blasts as a weapon against the pursuing ape army of Thade (a direct descendent of Semos). Pericles then emerged from his journey and made a safe landing, guided by the same homing signal. Leo escaped in the Alpha Pod and made his way back to Earth.

Some years later, with reconciliation between the apes and humans having failed, Thade's granddaughter Shiva made her way to the ruins of the Oberon to try to harness its power for her campaign against the human population. Believing that by tampering with the controls Shiva was endangering everyone, her associate Commander Kharim killed her. 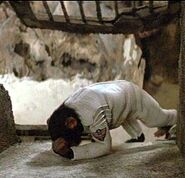 Retrieved from "https://planetoftheapes.fandom.com/wiki/Oberon?oldid=61117"
Community content is available under CC-BY-SA unless otherwise noted.