Planet of the Apes Wiki
Register
Don't have an account?
Sign In
Advertisement
in: APJ Characters, Marvel Characters, Humans,
and 8 more

Nova was a beautiful (and ultimately tragic) primitive and mute human girl, who became the companion and love interest of George Taylor, an astronaut stranded in a post-apocalyptic Earth that has become a Planet of Apes.

Nova was one of the first inhabitants of the new planet that the astronauts encountered, but was captured by the apes as her tribe was raiding their crops. Astronaut George Taylor was also captured. They were taken to Ape City where she was used by Dr. Galen for a blood transfusion to Taylor after he had been shot. Dr. Zira noticed the attraction between the two and permitted them to share a cell, desiring for the pair to mate.

Taylor, having been shot through the throat by a gorilla, was unable to speak, but when his speech returned he befriended the chimpanzees Zira and Dr. Cornelius.

He became attracted to Nova, and was pleased that he taught her how to smile after she was taken from him. When Lucius eventually organized Taylor's escape, Taylor insisted on Nova coming with them to the Forbidden Zone where Taylor learned the truth about the planet.

In her contact with rational humans, Nova made tremendous learning progress.

Beneath the Planet of Apes

In the sequel, Nova and Taylor journeyed through the Forbidden Zone where Taylor mysteriously disappeared and was captured by mutants. Nova wandered the Forbidden Zone until she fortuitously found the wreckage of Brent's ship; Brent had arrived on the planet in search of Taylor. Nova brought Brent to Zira and Cornelius in Ape City, but they were captured and held prisoner. Escaping, they headed for the Forbidden Zone where they discovered that beneath the surface of the planet was a forgotten city, inhabited by mutants who worshipped a massive nuclear bomb. Under the mutant's mind control, Brent attempted to drown Nova. Later, as Brent and Taylor stood in a cell, she watched in horror as the two men, under the mutant's control, tried to kill each other. Fearing for the lives of her friend and the man she loves, she spoke for the first time, crying out Taylor's name. The sound of her voice broke the mutant's mind control and freed Brent and Taylor. As she was reunited with Taylor and the three broke out, the forces of Ursus stormed the cathedral, killing any mutants on sight. One particular gorilla soldier ambushed the trio and managed to fatally shoot Nova in the back before Taylor and Brent killed the gorilla in return, avenging Nova's death. A devastated Taylor held Nova in his hands until Brent convinced him they must continue.

The film ended with Brent killed after killing Ursus and a mortally wounded Taylor detonating the bomb, destroying the planet and all it's inhabitants, ape and human alike.

Nova with Taylor and Brent shortly before her death 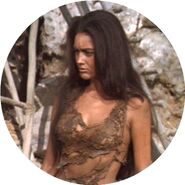 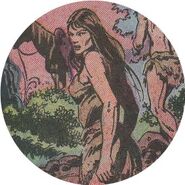 Gold Key's 'Beneath the Planet of the Apes'; illustration by Alberto Giolitti

Power Records' 'Planet of the Apes'; illustration by Arvid Knudsen and Associates 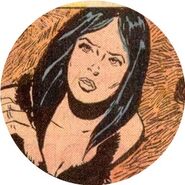 Marvel's 'Adventures on the Planet of the Apes'; illustration by George Tuska, Michael Esposito & George Roussos