New Life... On The Old Planet was a comic strip printed in Editorial Mo.Pa.Sa's 'El Planeta De Los Simios' 1977 Argentinian comics, written by Jorge Claudio Morhain and illustrated by Sergio Alejandro Mulko, and featuring the characters from the Planet of the Apes TV series. 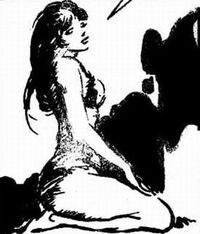 To the astronauts' surprise, their ship somehow survived the explosion, and they decide to return to the crash-site to continue their salvage efforts. Apes guarding the half-submerged vehicle attack. Running for a ladder, the two men reach the entrance to find more apes inside. The ape captain, Pingor, takes them captive and orders the ship destroyed so no other humans like Virdon and Burke can endanger their world. Pingor walks them to a village several hours away, tying them up and incarcerating them. Breaking loose, the fugitives make a break for the woods. There, they meet Golli, a beautiful woman who lives in a village in the jungle. Her family are slaves, forced to plant and harvest for the apes' benefit. Golli leads them through the forest and across a river to a farm whose occupants are friendly to humans, then returns to her village. Making their way across the river, they reunite with Galen, who had followed their trail through the forest.

Retrieved from "https://planetoftheapes.fandom.com/wiki/New_Life..._On_The_Old_Planet?oldid=43760"
Community content is available under CC-BY-SA unless otherwise noted.