War for the Planet of the Apes
Muir Woods National Monument, also known as The Redwood Forest, is a United States National Monument on the Pacific coast of Marin County, California, 12 miles north of San Francisco and part of the Golden Gate National Recreation Area. It protects 559 acres, of which 240 acres are old growth Coast Redwood (Sequoia sempervirens) forests, one of a few such remaining in the San Francisco Bay Area.

Due to its proximity to the Pacific Ocean, the forest is regularly shrouded in coastal fogs, contributing to a wet environment that encourages vigorous plant growth. The fog is also vital for the growth of the redwoods as they use moisture from the fog during the dry summer. One hundred and fifty million years ago ancestors of redwood and sequoia trees grew throughout the United States, and before the logging industry came to California, there were an estimated two million acres of old growth forest containing redwoods growing in a narrow strip along the coast.

By the early 20th century, most of these forests were cut down. Congressman William Kent purchased 611 acres of uncut land in a valley named Redwood Canyon just north of the San Francisco Bay, and in 1907 donated 295 acres of the redwood forest to the Federal Government, thus preventing a local water company from damming and flooding the valley. In January 1908, President Theodore Roosevelt declared the land a national monument. The original suggested name was the Kent Monument but Kent insisted it be named after naturalist John Muir, whose environmental campaigns helped to establish the national park system. In 1937, the Golden Gate Bridge was completed and park attendance tripled.

Scientist Will Rodman took his surrogate chimp son, Caesar, to Muir Woods for the first time when he was three years old. For the next five years, it became his favorite place to play and spend time in a habitat more natural to him.

After leading a mass breakout of genetically altered apes from the San Bruno Primate Shelter, Gen-Sys Laboratories, and the San Francisco Zoo, Caesar led the apes to freedom in the Muir Woods across the Golden Gate Bridge. Seeing only rampaging wild apes, the San Francisco authorities tried to corral the apes on the bridge and massacre them, but after a battle and many deaths on both sides, most apes survived. Caesar then led the apes to the Muir Woods.

The apes were then followed by Will who stole a police car and searched the forest for Caesar but his loud calling had alerted Koba, who was about to kill him on the spot, only to be quickly swatted away by Caesar. Koba tried to attack Will again but Caesar threatened the bonobo to leave Will alone. Though angered by this, Koba backed away and ran off into the woods as Caesar tended to Will. It is here where Caesar says bids farewell to his adoptive human father by speaking to him, telling him "Caesar is home" after the latter begged him to come back home with him. Will was amazed that Caesar talked and looking upon the other apes, decided to respect his adoptive son's wishes and allowed him to stay with his ape followers. With that, Caesar turned to his followers who cleared a path for him as he walked to his favorite tree which he loved climbing as a child. As he approached the tree, he turned to face the other apes who rose to stand on their feet like him showing they accept him as their leader. Caesar ran up his favorite tree where he was joined by Maurice and Rocket on the adjacent trees and three looked upon the damage inflicted upon San Francisco and wondered what future awaited their people.

Ten years after the Ape Rebellion, the ape population of San Francisco made the Muir Woods their home and built their own village at the top of the hills where their population has increased to over a thousand. Meanwhile, humanity was decimated and human civilization collapsed due to the Simian Flu Pandemic, forcing survivors to flee to any safe place they could find. Additionally, the population of the other animals in the woods, such as elk and bears increased due to the decreasing number of humans from the Simian Flu.

Two years into the Human-Ape War, the Alpha-Omega tracked the apes to the woods and destroyed several parts of it to draw out the apes' hiding spots, but had no luck. While searching for the apes hideout, a battle took place and led to many deaths on both sides but ended in victory for the apes. It was shown that the apes have made a secret passageway beneath the Ape Waterfall into their new home after the destruction of their village. Following the attack on the waterfall, the apes decided to leave the comfort of the woods to a safer haven in the form of an oasis on the other side of a desert. 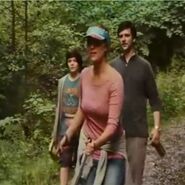 A human family visiting the forest.

Caesar visiting the forest with his human parents.

An Ape's Paradise: The home of Caesar's Ape Colony.

The Ape Village - Outside.

The beginning of Caesar's reign.

Caesar leads an attack through the forest.

The apes after a hunt in the forest.

Blue Eyes and Ash in the woods. 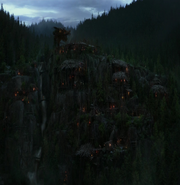 Caesar discovers humans in the forest.

Malcolm in the Woods.

Malcolm enters the Ape Village through the gate.

Alex and Maurice in the woods.

The Ape Village burned down

The Ape and Human armies fighting in the woods.

Ape Waterfall, the second haven of the apes.