Michael Wilson was an American screen writer from McAlester, Oklahoma. Wilson was credited, alongside Twilight Zone creator Rod Serling, with drafting the final script of the 1968 movie, Planet of the Apes. He taught English and joined the Marine Corps in World War II for three years before he contributed material to several major movie projects including It's a Wonderful Life (1946), and was the co-winner of the Academy Award for 'Writing Adapted Screenplay' for A Place in the Sun in 1952. He won an Edgar Award in 1953 for his script for 5 Fingers, his 1954 script for Salt of the Earth was his personal favorite, and he won a Writers Guild award in 1957 for his script of Friendly Persuasion (though this was one of the few films officially credited to no writer at all).

Wilson's career was interrupted and overshadowed by his 'blacklisting' at the hands of the 'House Un-American Activities Committee' ('HUAC'). Sympathetic to Marxist politics, Wilson's contribution to It’s A Wonderful Life is thought to include the idealistic dialogue of the central character.[1] HUAC declared Wilson an 'unfriendly witness' in 1951 for refusing to inform on left-wing members of the entertainment industry and implied that he was an unpatriotic communist sympathiser. In 1952, a clause was inserted into the Screen Writers Guild contract giving a producer the right to eliminate credit for a writer who had been an unfriendly witness. Among others blacklisted and denied work in Hollywood for many years were Kim Hunter, Jeff Corey, Victor Kilian, John Ireland, John Randolph and Howard Dimsdale, all of whom would later feature in Planet of the Apes. Wilson later recalled that even his agent was snubbed during this time, with John Wayne commenting: "I don't shake hands with people who represent Commies."[2] As a result, Wilson and his family lived in France between 1954 and 1964, where he worked for the European film industry and continued to write for Hollywood either uncredited or using a pseudonym. One of the screenplays he co-wrote during this period was for The Bridge on the River Kwai (with Carl Foreman - also blacklisted), which won an Academy Award in 1957 for novelist Pierre Boulle, who had been given the writing credit despite, by his own admission, not even speaking English. Wilson's and Foreman's names were added to the award in 1984, after both had died - Wilson's second Academy Award. Michael Wilson also wrote the original screenplay for Lawrence of Arabia (1962), initially uncredited but following a Screen Writers Guild inquiry he was eventually given an award for co-writing the screenplay. Dalton Trumbo’s writing credits on both Spartacus and Exodus in 1960 signalled the weakening of the blacklist. Wilson, who had become estranged from the Communist Party after the crushing of the Hungarian uprising in 1956, eventually returned to the USA and began to work under his own name again, starting with The Sandpiper (1965), followed by Planet of the Apes.[1]

Wilson was the third screenwriter hired for Planet of the Apes - adapted from another Pierre Boulle novel - after Rod Serling and Charles Eastman (Eastman's contributions were not used). He contributed most of the dialogue that was ultimately filmed, submitting his final draft on 5th May 1967 - shortly before filming began. "[I worked on the script] about five months ...with [Arthur Jacobs] and his associate producer, Mort Abrahams, and with the director Franklin Schaffner. For story conferences, it was the three of us together." "[Charlton] Heston had been interested. But he said, 'Show me a script first'. He wanted to read it before he'd seal the deal. After Heston read what I had done with it, he agreed to sign on."[3] Having been attached to the project since mid-1965, Heston's published diaries reveal his approval: 25 January, 1967 - "I've read seventy pages of Michael Wilson's new script on APES, which seems to me immensely good, an improvement on the Rod Serling script."[4] Another screenwriter, John T. Kelly was also added to make final adjustments to the dialogue, though only Serling and Wilson received credit. The story itself was mainly the work of Serling, Mort Abrahams later recalled: "...the backbone of the story was Rod's. Basically, I think it went through four versions with Rod and three or four with Michael... then I called in Kelly and he did two or three drafts, which was, as I say, mostly dialogue polish and added a couple of notes of humor, and a couple which Frank [Schaffner] and I added on the set, like the 'monkey-see-monkey-do' and 'see-no-evil, hear-no-evil."[5] (In fact, the "see no evil, hear no evil, speak no evil" expression featured also in Charles Eastman's earlier script.) Wilson also helped come up with the more economical design for an Ape City: "We wanted to find an architectural style for the apes culture which would look quite unlike anything people had ever known in America and yet didn't seem futuristic or phony or anything. I came up with a suggestion. There's a Spanish architect named Antonio Gaudi, who is considered a great man in Spain and has some marvellous architecture there. His architecture suggests a kind of arboreal past; some of the columns of his buildings seem like giant trunks of trees. I took this to the art director and he agreed that this was inspirational. So the city of the apes in the picture was built in that fashion. Which suggested that these people were - well, trees were nostalgic to them for having lived in them at one time."[3]

Asked about his contribution to the final screenplay, Rod Serling said: "The scene breakdown, the concept, and the thrust of the piece was mine. But the actual dialog was Michael Wilson's. I had left the premises long before Wilson came in. I owned no piece of the project at all, and they had every right to choose another writer. It was a pretty damn good film, I thought Schaffner did a corker of a job directing it." [6] He later added: "Well, Arthur [Jacobs] and I kept in touch over a period of time but then he decided to give the script to Mike Wilson, who in turn took away almost all of my dialogue and used his own. My recollection, though, of the shooting script is that the chronology of scenes and events was identical to mine - except that the people didn't say the same things. For example, there was the museum sequence where you see the astronauts stuffed. That was mine. But I didn't have the dialogue that covered it. Mine was much more sombre and serious dialogue. There was very little humour in my piece. If you recall, Wilson used a lot of puns and juxtaposed familiar expressions like 'I've never met an ape I didn't like', that kind of thing. I gather the humour was one of the key reasons for the success of the picture. I blew it and Wilson did it." "As I said, we'd been in touch roughly all during that time. They offered me collaborative credit almost immediately. But it's really Mike Wilson's screenplay, much more than mine." [7]

Asked about HIS contribution to the final screenplay, Wilson agreed with Serling's assessment that it was mostly his (Wilson's) work: "The first screenplay was written by Rod Serling. This, as it turned out, was a straight science-fiction story about an ape culture on another planet in another solar system. I altered all of that to make it a satire. A satire, really, on the human race. Because it turned out the apes - these civilized apes - had descended from humans on our own earth and the astronauts had inadvertently returned to our planet only to find out that earth had been wiped out by a nuclear bomb and, therefore, the dominant species that had evolved was the apes who had descended from and imitated the culture of man which had preceded it. Which accounts for the satire of the story. Which is what I did to it." "I had never done [science-fiction] before, ...and I didn’t consider this story in that category either. What I felt it needed was satire. It was too straight and too serious the way it was done before I came on." "[The humor] certainly contributed to its [success]. No question." "As I said, [my screenplay] was not straight science-fiction. It was more about the human predicament than it was about apes. I think this is the key point."[3] 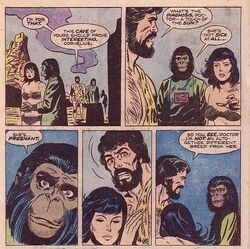 Wilson fiercely resisted his instruction to kill his central character at the film's conclusion, eventually persuading the producers that the narrator must survive in order for his story to be told. Wilson was responsible for introducing the Lawgiver, the Sacred Scrolls, and the court scene in which the dogmatic hectoring of Taylor is reminiscent of the HUAC hearings.[1] Wilson said: "Rod Serling and I did not collaborate. He wrote the first draft screenplay. I wrote the second, third, and final drafts." "Virtually all my work was in the final film - with one significant deletion. In the penultimate drafts of 'PLANET OF THE APES', Nova (Linda Harrison) was pregnant With Taylor's (Charlton Heston) child. In this version, Taylor was killed by the bullet of an ape sniper just after he sees the Statue of Liberty. But Nova escapes, vanishing into the Forbidden Zone beyond the Statue of Liberty. The meaning is clear: if her unborn child is a male and grows to manhood, the species will survive. If not, modern man becomes extinct. Such an ending left open the possibility of a sequel long before sequels were discussed. Nova's pregnancy was deleted from the film, I'm told, at the insistence of a high-echelon Fox executive who found it distasteful. I suppose that if one defines the mute Nova as merely 'humanoid' and not actually human, it would mean that Taylor had committed sodomy." "I liked Franklin Schaffner's treatment of my material and found the picture well directed."[6] Heston alluded to this revision in his published diaries: 16 May 1967 - "I think Frank's new ending on APES is very good... Taylor doesn't die, now; he finds the Statue of Liberty, and knows where he is. Fade-out."[8] (A scene was included when Marvel Comics adapted the movie from the original script, but had the dialogue altered. However, the following year the strips were re-printed in colour in Marvel's Adventures on the Planet of the Apes comics with the original 'pregnancy' dialogue restored, probably by mistake.)

On the subject of the movie's acclaim and its sequels, Wilson had mixed views: "I sensed it as soon as the picture was completed, and before any footage was seen by anybody except the people directly involved with the production. I knew we had a hit on our hands." "[The sequels] were offered to me but I was always busy on something else. I also felt I had done my duty to the apes. I felt that that was enough."[3] "Sequels were not discussed by anyone I knew at the time of the production of PLANET OF THE APES, but the subject was broached immediately after the picture's fabulous success was assured. As in most sequels, there was a deterioration of quality - in this instance to the level of comic-strip science fiction. But I had nothing to do with the sequels, and my reaction may therefore be subjective."[6]

Michael Wilson went on to write Che! in 1969 - his last filmed screenplay. He died of a heart attack in April 1978. The 2008 Blu-Ray Planet of the Apes collection included the new featurette Evolution of the Apes - a short documentary tracing the development of Pierre Boulle's novel into a movie - with Becca Wilson interviewed about her father's involvement in the franchise.

Retrieved from "https://planetoftheapes.fandom.com/wiki/Michael_Wilson?oldid=61450"
Community content is available under CC-BY-SA unless otherwise noted.