Michael Conrad was an actor featured on the Planet of the Apes television series. He appeared in the episode "The Tyrant" as Janor. 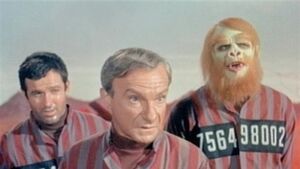 Retrieved from "https://planetoftheapes.fandom.com/wiki/Michael_Conrad?oldid=18536"
Community content is available under CC-BY-SA unless otherwise noted.