The producers of Planet of the Apes were slow to realise just how much potential there was for spin-off marketing of the franchise. The Topps Chewing Gum Company had been the first to issue official merchandise, in the form of a 66-card set of Planet of the Apes bubblegum trading-cards sold at five cents a package in 1968. A record album featured the original soundtrack of the film with photographs of cast members inside. Hardcover and paperback issues of the source novel were already available during the 1960s, but sales of Signet-issued paperback reprints were probably boosted by the release of the movie adaptation. The second movie - Beneath the Planet of the Apes - prompted a novelization, a comic book adaptation and a soundtrack album, but none of the subsequent movies received this honour during their theatrical run. There were posters and an assortment of lobby cards and movie stills, but little else on the scale of the kind of campaign that is standard in today's Hollywood movie industry. Up to this point, mass-market merchandising of a movie title was unheard of, so it's not surprising that it wasn't explored further.[1] 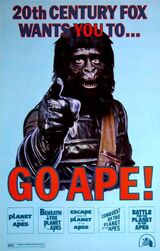 Shortly after the June 1973 premier of Battle for the Planet of the Apes (the final movie) and the death of Apes movie producer Arthur P. Jacobs, the CBS network bought the TV rights to the first three movies and aired them in a row on prime-time TV, to the highest ratings in history for a sci-fi series up to then. In response, 20th Century Fox began showing all five Apes films in back-to-back "Go Ape!" film marathons in movie theatres.[2] This started the mid-'70s "Apemania" hype which ultimately spawned a vast merchandising spree. The first company to exploit this new-found market was Addar Products Corp., who produced Figure Model Kits & 'In-A-Bottle' Kits based on the movie characters between 1973 and 1975. The New York-based Mego Corporation had already marketed action figures including Tarzan, Superman, Batman & Robin and Spiderman when company President Kenny Abrams attended one of the "Go Ape!" mararthons. The next day he was on the phone with Fox executives to outbid rival Azrak Hamway International (AHI) to secure the rights to produce figures and playsets based on Planet of the Apes. On August 9th-10th 1974 Mego staged a special promotion at the Hempstead Times Square Store in Long Island, New York to promote their new Apes line of five figures from the original film - Cornelius, Zira, Dr. Zaius, the Soldier Ape (in Brown/Maroon, Common Blue or Lizard Print), and the Astronaut (Mego, having been denied permission to use Charlton Heston's likeness, as were Marvel Comics, chose to give the human no name) - along with a 'Treehouse' and 'Village Playset' and a remote control horse in brown or yellow: the 'Action Stallion'.[3]

The next step was the Apes TV series; having already passed on the series in 1973, CBS began production in earnest in June 1974. As successful as the whole range of Planet of the Apes movies had been, the explosion of related merchandise would likely not have occurred had the concept not been adapted for a television series. On hearing rumours of the production, Marvel Comics beat rival DC to acquire the license, and the first of 29 issues of their Planet of the Apes Magazine - containing comic adaptations of the five movies and original stories along with Apes-related articles - arrived on the shelves in the United States in August 1974; Marvel launched a weekly comic for the UK market the following October. Literally hundreds of Apes items were licensed and dozens of other companies flooded the market with everything from apes cookware to puzzles to beachballs in anticipation of the debut of the TV series that September, some items running to $60. According to Selwyn Rausch, a New York merchandiser who was responsible for this aspect of the Apes craze, "by the end of this year we estimate $100-million gross sales in all kinds of 'Ape'-related merchandise. Why anyone would want a Planet of the Apes wastebasket I don't know, but they're selling like crazy."[4] Award Books published novelizations of the last three movies, and followed these with novelizations of episodes of the TV series. Likewise, Power Records produced 'Book-And-Record' adaptations of four of the movies followed by four original audio adventures based on the TV series. A band called 'Electric Cowboy' anonymously recorded the Planet of the Apes - A Musical Trip album for TPI Records, and the Macy's Thanksgiving Parade of November 1974 included a Mego Planet of the Apes float, which featured the band members and Mego bosses in costume. There was a second set of trading cards from Topps in 1974.

Mego produced a second line of action figures consisting of Galen, Alan Verdon (sic), Peter Burke, General Urko, and General Ursus. This second wave of Mego Apes toys probably started hitting store shelves in early 1975. They also re-released their earlier line and produced more playsets and accessories in the form of 'The Forbidden Zone Trap', 'The Fortress', 'The Catapult and Wagon', 'The Battering Ram', 'The Jail', 'Dr. Zaius's Throne' and 'The Lost Continent' ("scaled for the Planet of the Apes"), as well as six 5-inch Bend 'n' Flex figures including the Astronaut, Dr. Zaius, Zira, Galen, Cornelius, and the Soldier Ape.[3] Although AHI was an official licensee for other Planet of the Apes products - including 'Sky Diving Parachutist' versions of both Galen and Dr. Zaius, wind-up Galen and Zaius 'Little Walkers', a wind-up Zaius on horseback, a friction-powered Apes 'Prison Wagon', chimp and orangutan water pistols and even a motorcycle-riding 'Rev Up-N-Go' Zaius - they also produced 'Action Apeman' figures which were obviously intended to pirate Mego Apes figures, and legal action forced AHI to cease making them.[5] Meanwhile, the United Manufacturing Company produced their own line of 'Astro Apes' which appear to have been moulded from Mego figures. The four Astro Ape characters were 'Warrior Ape' (taken from Mego's 'Galen' but representing Ursus), 'Artemus' (representing Cornelius), 'Myra' (representing and taken from Mego's 'Zira') and 'Dr. Zorma' (representing and taken from Mego's 'Dr. Zaius').[6] In the UK, Mego figures were released through Palitoy.

The action figures and play sets were only part of the Apes bonanza. Official merchandise was licensed from Fox and the vast array of products proved to be briefly very lucrative. Ultimately, everything from puzzles to rings and wastebaskets bore the image and logo of the remarkable planet "where apes evolved from men":

The premature cancellation of the Planet of the Apes TV show in December 1974 - half-way through it's run - was obviously a disappointment for those involved, but the explosion in Apes merchandise showed no signs of slowing down. In Japan, a glaringly-similar TV series called Army of the Apes - about humans thrown forward to a time when apes are in control - was broadcast from October 1974 to March 1975 - considerably longer than the real Apes series. In the UK, where the TV series had proved to be perhaps even more popular than in the States, a Planet of the Apes Annual based on the show was published by Brown-Watson in 1975, with further annuals for the following two years. Also in 1975 Chad Valley, a UK toy company, produced 32 short comic strips as the 'Chad Valley Picture Show Planet of the Apes Sliderama Projector', containing reworked scenes from various TV series episodes. Back in the USA, Marvel Comics began publishing colour reprints of the comics from their Apes Magazine as Adventures on the Planet of the Apes from August 1975. The failure of the live-action TV series merely spurred Fox on to find a more economic alternative. The success of the comics provided an idea - exciting animated adventures produced for a fraction of the cost. The Saturday morning animated series Return to the Planet of the Apes debuted on NBC TV in September 1975, but fared no better than it's predecessor, being cancelled by the end of the year. The Apes merchandising blitz had peaked by now and the toys were soon replaced on the shelves. Marvel eventually ended it's US and UK titles in 1977, as did Brown-Watson, marking the end of "Apemania" but providing inspiration for every major Hollywood blockbuster since. 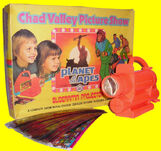 The long years between then and Fox's faltering attempt to relaunch the movie franchise were interupted only by Adventure Comics' extensive line of comic books in the early 1990s, and new sets of trading cards in 1994 from Ken Barr and in 1998 from Inkworks. The revival of the Planet of the Apes saga in 2001 brought a whole new phase of merchandising, though nothing on the scale of what had gone before. Most notable were Dark Horse Comics, who launched another set of comic books, and HarperCollins, who delivered a series of novels based around the new film. These were both short-lived licenses, despite being arguably of better quality than the movie they were based around. In contrast, the bigger result was the revival of interest in the original movies and their merchandise, both vintage and reproduction. Diamond Select Toys, in co-operation with 20th Century Fox and popular toy manufacturer Medicom of Japan, gave fans of the original Planet of the Apes a new line of 'Apes Action Figures'. There were 18 figures in all, with three or four available each month for several months. The figures started in May 2002 with Lucius, Cornelius, Soldier Ape, and General Ursus and later included a Charlton Heston-approved Colonel George Taylor, Caesar, and Dr. Zira, among others. All of these highly detailed figures included various accessories, and came in eye-catching blister card packaging.

In a press release on January 21, 2014 The National Entertainment Collectibles Association or NECA partnered with Twentieth Century Fox Consumer Products for a new merchandise program based on the beloved Planet of the Apes franchise, which is set to include new products based on the film DAWN OF THE PLANET OF THE APES as well as the classic movies. They became available on summer 2014, The program will include a wide assortment of collectible products designed to excite audiences of all ages such as action figures, giftware, apparel, accessories and more. The new product lines were made available to coincide with the release of DAWN OF THE PLANET OF THE APES, and incorporated characters and elements from both the classic movies as well as the newest installment. Items feature fan-favorite characters Caesar, Koba, Maurice, Cornelius, Zaius (APJ), and the rest of the world’s most well-known primates. 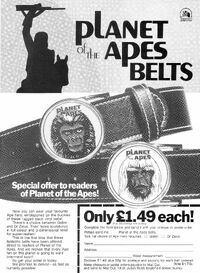 Retrieved from "https://planetoftheapes.fandom.com/wiki/Merchandise?oldid=61049"
Community content is available under CC-BY-SA unless otherwise noted.