Mentor Huebner (19 July 1917 - 19 March 2001) was a leading Hollywood production illustrator who did storyboards, production art and creative concepts for more than 250 films, including The Time Machine (1960), King Kong (1976), Blade Runner (1982), Dune (1982) and Francis Ford Coppola's Dracula (1992). He worked in a wide variety of roles, as an animator (the "heigh-ho" sequence from Snow White and the Seven Dwarfs), a conceptual storyboard artist, and production designer and art director. Huebner was also involved with The Forbidden Planet, Ralph Bakshi's Lord of the Rings and other science fiction films. [1] 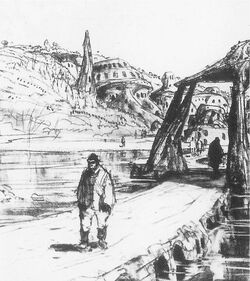 Of particular note to this site, Huebner was also responsible for many of the production sketches for the original Planet of the Apes movie. Producer Arthur P. Jacobs claimed he "had sketches made, and went through six sets of artists to get the concept, but none of them were right. Finally, I hit on a seventh one, and said that's how it should look." [2] While Jacobs didn't identify any of the artists involved, it is understood that Huebner was contracted as early as October 1963.[3][4] Mentor's widow confirmed that he worked closely with Jacobs prior to anyone else, and did the first conceptual designs. She believed there were no drawings made before Mentor's, and noted that at times in Mentor's career his concept designs would be used for another artist to spring off in order to save money. Speaking in 2003 after his death, Louise Huebner stated that Mentor "designed the entire film including the 'look' of the apes in 'Planet of the Apes'. In fact, his drawings were instrumental in obtaining the necessary financing for the original producer and in convincing a reluctant Charlton Heston to accept the lead role".[5]

It seems Huebner was brought back to the Apes project around early 1967 to help visualise an avant-garde ape city.[3] Art Director William Creber, speaking in 1998, praised the contribution of Huebner towards the design of the movie's 'Ape City': "I had an artist, Mentor Huebner, still a very famous and fine motion picture illustrator, putting all those pieces of research together to get a look, having no idea how we would ultimately build it."[6] Mentor later gave some of his Apes production storyboards to his good friend Mike Ploog, who provided the artwork for many of the Planet of the Apes comics for Marvel Comics between 1974 and 1976.[7][8] Heubner and Ploog would later work together as storyboard artists on John Carpenter's 1982 movie The Thing. Louise Huebner retained many of Mentor's Apes drawings which have never been made public.

Retrieved from "https://planetoftheapes.fandom.com/wiki/Mentor_Huebner?oldid=61458"
Community content is available under CC-BY-SA unless otherwise noted.