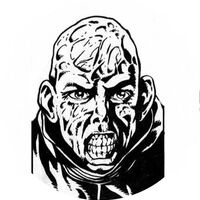 Mendez Ten (or Mendez 10) was a mutant from New York who lost a power struggle with Lord Kolp and fled to 'Primacy' to start a new life.

Possibly, Mendez Ten was a biological descendant of the first Mendez who occupied the West Coast Forbidden Zone in the late 20th/early 21st century. It could also be guessed that Mendez' genealogical line was restored to power, and extended into the 40th century, culminating with the Dynasty's final inheritor, Mendez XXVI, but whether or not 'Mendez' was the mutant's true birth name, or merely an honorarium is unknown.

Retrieved from "https://planetoftheapes.fandom.com/wiki/Mendez_X?oldid=58422"
Community content is available under CC-BY-SA unless otherwise noted.