Méndez was Kolp's First Lieutenant in Battle for the Planet of the Apes. He disagreed with Kolp's militaristic ways. In scenes deleted from the original release of the film, when Kolp went to battle with Ape City (made up of apes and humans who fled the Forbidden City before the war) with his mutant army, Méndez remained behind, supervising the team who safeguarded their "secret weapon"; the Alpha-Omega Bomb. Kolp ordered Alma to fire the missile if he were to be defeated. She promised to, but when Kolp lost the battle, and the default order to fire the missile at Ape City was received, Méndez instead rejected the order and dissuaded her from destroying the world, reminding everyone that using the missile would not just destroy the apes. Instead he suggested that if they venerated the fearsome object and preserved the missile through time, they would never lose hope or a sense of purpose. He became the new human (mutant) leader, and his attitude toward the missile became the code of the underground humans, who built their society to reflect that code. His successors in turn carried his name, as a reminder of their purpose. Completing the circle, in the second movie the leader of the mutants was also called Mendez and the implication is that those mutants, who worshiped that same bomb, were the descendants of this Méndez, who spoke so reverently about the bomb's power.

The short story The King Is Dead - Long Live the King, written by Rich Handley for the anthology Planet of the Apes: Tales from the Forbidden Zone, gives Mendez a first name: Oscar.[1]

In the 2018 novel Death of the Planet of the Apes, Taylor touches a bust of Mendez I and sees a vision of Grand Central Terminal during its devastation by nuclear holocaust. He sees missiles triggering a fault line at New York City and the area around Grand Central Terminal buried under radioactive rubble just as a military train arrives with a deadly cargo. General Mendez places the area under martial law and conscripts the civilians. After decades believing themselves to be the only survivors on the planet, Mendez discovers that others live on the surface, but decides to keep his highly-ordered community underground in ignorance. 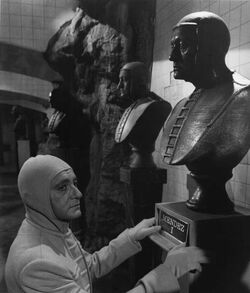 Retrieved from "https://planetoftheapes.fandom.com/wiki/Mendez_I?oldid=60430"
Community content is available under CC-BY-SA unless otherwise noted.