The Mego Corporation (also known as Mego International) was a toy manufacturing company that produced a series of popular eight-inch action figures during the 1970s. While predominately concentrating on toys within a super-hero venue, Mego also produced figures and playsets for other popular name brand franchises including Star Trek, The Wizard of Oz and Planet of the Apes. 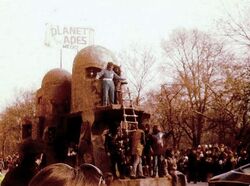 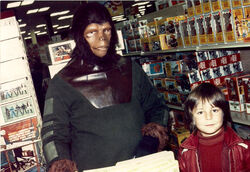 In August 1974, the Mego Corporation began production of a line of eight-inch, articulated Planet of the Apes action figures. The series included characters from the original five Arthur P. Jacobs films as well as the Planet of the Apes TV series. The first wave of toys featured characters from the 1968 film, Planet of the Apes. Included in the set were Cornelius, Dr. Zira, Dr. Zaius, a gorilla soldier and George Taylor. As Mego had not received legal rights to use actor Charlton Heston's likeness, the Taylor action figure was created from a generic mold and was labeled only as the "Astronaut". [1] In the fall of 1974, CBS began airing the Planet of the Apes television series. In tandem, Mego released a series of action figures based upon the characters featured in the show. Less popular than the traditional eight-inch figures was a series of six five-inch "Bend 'n Flex" toys produced in 1975. The Bend 'n Flex line featured the same five movie characters from Mego's initial toy line: Astronaut, Soldier Ape, Cornelius, Zira , and Dr. Zaius, plus Galen from the TV series. [2] A notable feature of Mego's promotional campaign at the time was the use of actors in full costume to make in-store appearances [3](this was separate from the US 'Zira & Cornelius' appearances and the Apes UK Live Shows). Mego also had a Planet of the Apes display in the Macy's Thanksgiving Parade of 1974, which featured, in costume, the members of the band 'Electric Cowboy', who had just recorded the Planet of the Apes - A Musical Trip album.[4][5][6] The U.K. line of Planet of the Apes poseable figures was produced by a company called Palitoy.

For the Mego Corporation, marketing of the Planet of the Apes merchandise marked the zenith of their existence. By 1976, they found profits suffering a slow rate of decline. Their efforts with American West and Star Trek were faltering. In 1977, the company declined product rights to another science fiction movie, deciding such films had no future.[7] Instead, competing toy manufacturer, Kenner, optioned the license to produce action figures for the upcoming science fiction epic - Star Wars. The Star Wars line proved extremely popular with consumers, and interest in the larger eight-inch action figures began to wane. In 1982, the Mego Corporation filed for bankruptcy and eventually shut down its production line in 1983. [8]

Planet of the Apes Product Line 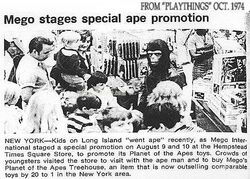 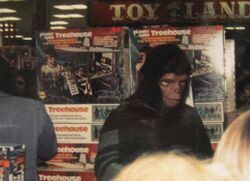