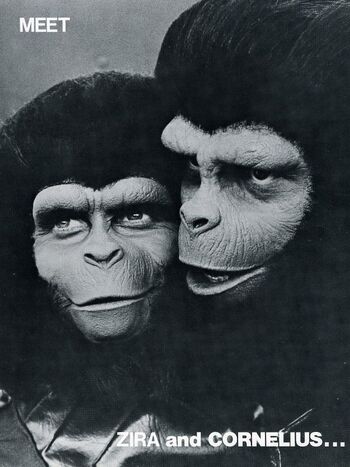 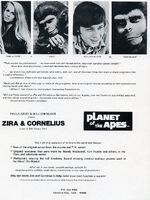 After seeing some pictures from the set of Conquest of the Planet of the Apes, dancer, singer and sci-fi fan Paula Crist wanted to put on an exhibit at the 'World Science Fiction Convention' in LA, September 1972, and got in touch with 20th Century Fox about doing a 'behind-the-scenes' display on the Apes movies. They gave her "the original Zira costume, a lot of props, hairpieces, and makeup." She used makeup appliances loaned to her by Dan Striepeke with a costume she made herself and did a routine at the Worldcon linking 'Conquest' to 'Planet'. Impressed by photos of her act, producer Arthur P. Jacobs called Paula to his office and offered her a part as an ape in the next sequel, Battle for the Planet of the Apes. To her disappointment, Paula did not get a speaking role because she wasn't in the Screen Actors Guild, but she did appear as a human girl imprisoned by Aldo's gorillas, as well as "a nondescript chimpanzee extra in the background". After her experience on 'Battle', she began a career as a stuntwoman, doing her first stuntwork on 1974's 'Earthquake'.

Bill Blake, meanwhile, had corresponded with John Chambers about Apes makeups and had made someone up as an ape for a college assignment. They were spotted by a local Philadelphia TV station, which led to a job on a children's show doing makeup and acting. Paula contacted Bill after seeing some of his work in 'Famous Monsters of Filmland' magazine and asked if he could help design some makeup for a convention appearance. Bill flew out to Los Angeles and they found that they could each do very convincing routines as Zira and Cornelius, and worked very well as a team. They initially performed at some fundraisers and benefits, and appeared at a convention in Washington DC in September 1974 under a "license from a gentleman in Detroit...who let the license lapse". They then obtained their own license from Fox and performed their first shopping mall appearance together in October '74, which was a huge success. Bill got a role as a chimp 'country ape' in an episode of the TV series ('The Interrogation') around this time also, although his scene was later cut from the episode.

An extensive interview, recorded in spring 1975, was printed in Marvel Comics' 'Planet of the Apes Magazine' issues 12 and 13, along with a follow-up 'photo primer' in issue 27 detailing the posture and movements required to convincingly portray an ape (most of the information in this article comes from this interview). Paula and Bill spoke about how their act started, they demonstrated Bill putting on his appliances and Paula pointed out how the costumes were specifically designed to produce a simian appearance through the tailoring and the fact that the large feet required the wearer to stand with feet pointing outwards. While they had original costumes from the movies, they had to design and build new harder-wearing feet for the routine. Bill made the makeup appliances, which they had to re-use repeatedly, unlike the appliances used on the movies.

During their routine they would answer quesions from the audience and re-enact scenes from the films, mostly from Planet of the Apes. The 1975 Marvel Comics article also printed numerous pictures of acts involving characters other than Zira and Cornelius, and of stunt routines worked out by Paula and Bill. They both auditioned to do voice acting in the Apes cartoon series in 1975, but were turned down because they sounded "too much" like Kim Hunter and Roddy McDowall. According to a later interview with Paula, they did their stage show for around six years, touring extensively both within the United States and abroad, before their personal and professional partnership ended. Notably, Paula and Bill logged more time in costume and make-up than any other Apes actors, including Roddy McDowall. A demo reel with Bill and Paula was made at Orange Coast College in 1976, for a proposed further sequel to the Apes films titled Salvation for the Planet of the Apes. The story line was designed to tie-up the loose-ends from the previous films. According to Rich Handley's Lexicon of the Planet of the Apes, it involved a human scientist named Jason Crist who travels through time to stop Earth's destruction, but finds a technologically-advanced city elsewhere on the Planet of the Apes and meets chimps Demetrius and Serena.[1] Sadly, the sound was lost from the demo reel along with additional footage, but it is one of the few known recorded examples of their work and can be viewed below left. 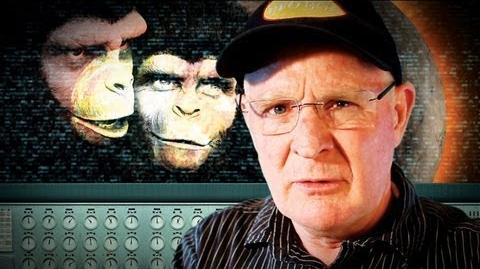 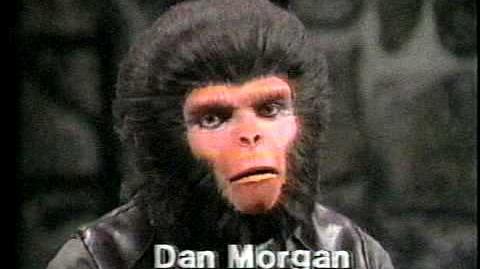 Meanwhile, in the late 1970s, fans of the Apes films and TV series, Dan Morgan and Tom Rubalcava were trying to figure out how these makeups were created. By the early '80s they were experimenting with foam latex appliances and attended two comic/sci-fi conventions in the Bay Area, including the CreationCon in Oakland where they won the first prize for best makeup. They met local “Creature Feature” TV host John Stanley during one of those appearances and, not long after, Paula Crist. Their Cornelius creation was invited to appearances at a local movie theater and on Stanley's TV show (which can be viewed above right), and it was this makeup that caught Paula Crist's attention. She had been approached by the company Martin Marrieta for the Apes couple to appear at a company retreat and week of parties in St. Croix, U.S. Virgin Islands. Paula offered the job to Dan to perform his Cornelius/McDowall impression and join her on this once-off appearance - with permission from 20th Century Fox - in 1982, using the same costumes that had been worn in the previous live show performances.

Bill Blake has made regular guest appearances at conventions, including a makeup demonstration and full-costume appearance at the 'Starcon' convention in 1996, and continues to be involved in Apes fandom, including contributing to the Behind the Planet of the Apes documentary in 1998.

Paula Crist-Pickett was once a regular at sci-fi conventions, particularly for her involvement in "Star Trek", and wrote an article about her involvement with "Planet of the Apes" in the 'Simian Scrolls' fanzine in 2007. In recent years, her involvement in fan circles has been greatly reduced. She has changed her name to Qeldas Pickett (a Klingon name) and now works as a professional costumer, displaying costumes of her own design at various conventions.

Dan Morgan and Tom Rubalcava resurrected their Cornelius character, having purchased the Cornelius costume that Paula made, and appeared at the 'WonderCon' convention in February 2008. 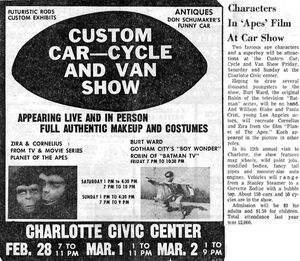 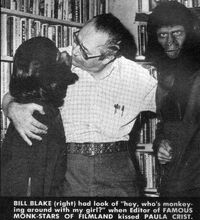 Retrieved from "https://planetoftheapes.fandom.com/wiki/Meet_Zira_and_Cornelius?oldid=60969"
Community content is available under CC-BY-SA unless otherwise noted.